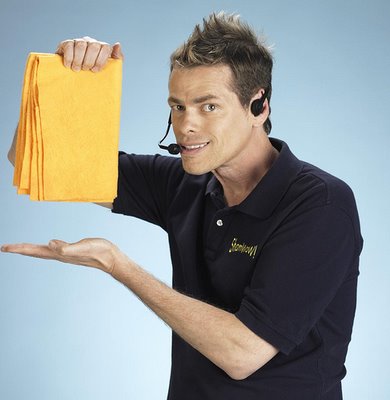 I despise sales pitches, but you wouldn’t know it if you were the first person to visit our Scout exhibit booth. After introducing myself, I delved into a 5 minute whirl-wind tour of Scout 2.0, trying to show every possible feature that might help him monitor his Rails stack.

As he walked away, I felt a little dirty, a little QVC-like. I hoped my career wasn’t heading down the path of another famous pitchman.

We exhibited Scout at our first conference, Golden Gate Ruby Conference, run with Scandinavian precision and held, not ironically, at the Swedish American Hall. I started a little awkward telling the Scout story, but things really smoothed out quickly. 8 lessons from our first conference:

Don’t dive into the product

It’s important to have a specific use case that someone can relate to. Everyone uses Scout in their own unique way. If I do a general demo, I’ll be doing it from my perspective, not their own.

Rather than drowning people in features, I tried to isolate a major problem they have and showed how Scout can help. From there, people were a lot more engaged and led the demo themselves.

Stand in front, not behind the exhibit table

Yes, I’m a developer, but I don’t usually bite and a I brought breath mints. Sitting behind a table isn’t engaging.

I demo’d less and talked more. You don’t need a Mac Cinema display to have a conversation.

Have a curious visual display

Scribd, the exhibit next to us, had a display that provided a real-time view of search queries directed from Google to the Scribed website. Did it have anything to do with the actual product? No – but it really demonstrated the volume of traffic that Scribd handles. It was a great way to start a conversation.

At least on my Mac, Safari is a lot faster than Firefox. It’s cleaner-looking as well.

We’re not that well known and my wife’s family isn’t rich, so we need to rely on word-of-mouth instead of marketing dollars to spread Scout’s goodness. Don’t be afraid to spend time away from the booth talking to other attendees.

Golden Gate Ruby Conference was a blast and we met a lot of people that are going to benefit from Scout. Technical conferences are really about people, not technology. That applies to the exhibit booth as well.