DataDog vs. Scout: which is right for you?

You're probably confused where DataDog and Scout overlap. You're not alone! They've each offered similar products since their inception, and come on, they both have dogs in their logos!

Here's a timeline to clear things up:

Both DataDog's and Scout's APM offerings are solid, but they are aimed at different teams. How are they different, and what's the best fit for you?

Does your code or your infrastructure trigger more problems?

Let's start with the slogans.

Scout is developer-centric: this makes Scout a great tool if many of your time-consuming performance problems are triggered by product code written by your engineering team. DataDog is DevOps-centric: it's an extensive platform for charting just about any type of metric, from many different services, in a variety of different ways.

DevOps engineers write code, but it's typically infrastructure code and orchestration code. They are far less likely to modify the functionality of a web endpoint on their own.

Let's take a look at three areas of the DataDog and Scout APM products so you can see the difference.

The soul of app monitoring is the transaction trace: all the metrics and analysis an APM platform delivers originates from data collected in a trace. A transaction trace is a single web request or execution of a single background job.

The screenshot below shows a transaction trace for the same web endpoint in DataDog and Scout: 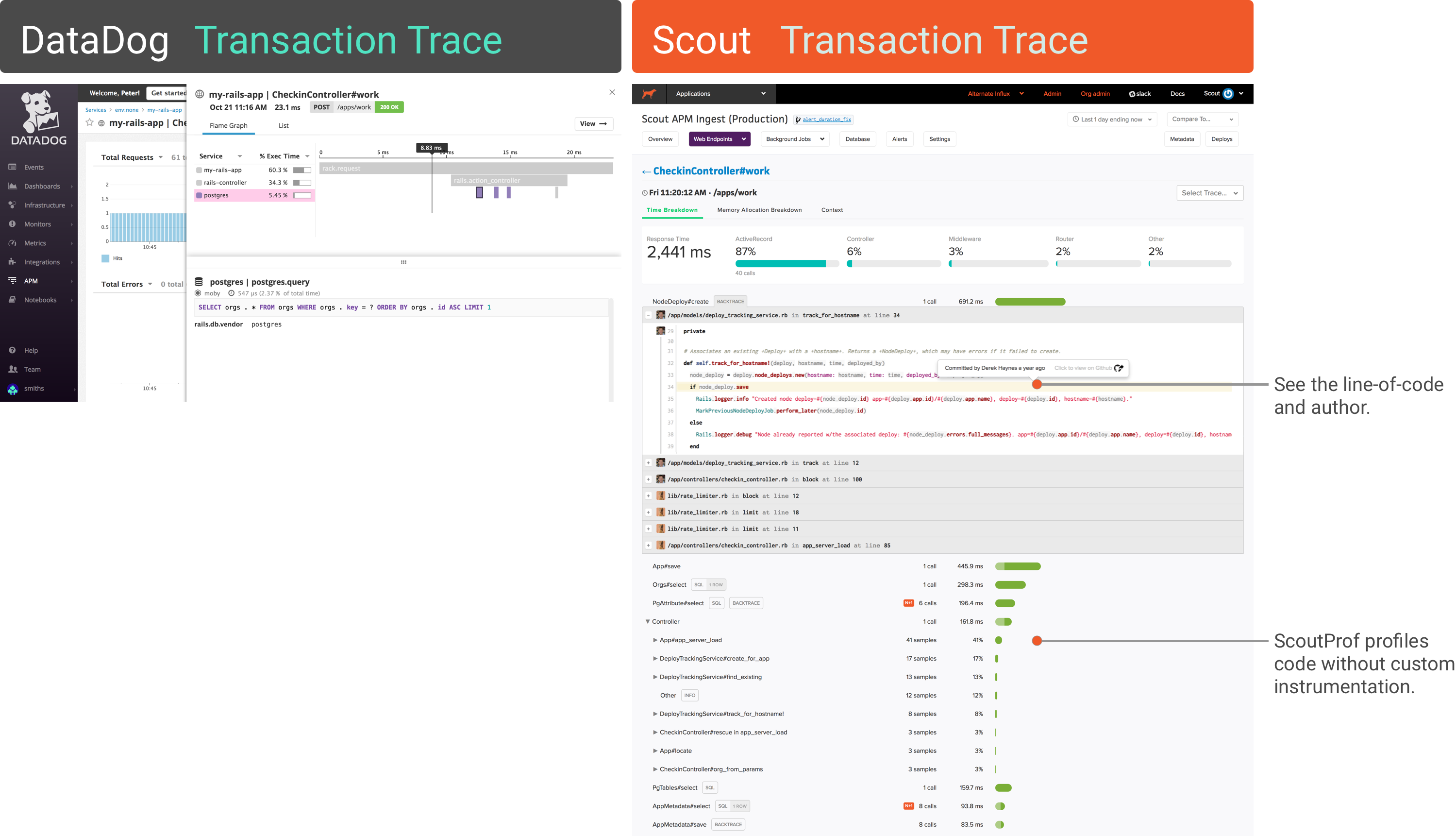 Highlights of the developer "special sauce" in the Scout trace:

Both DataDog and Scout provide a Daily Digest of your app's health via email. How this is displayed looks quite a bit different:

Highlights of the developer "special sauce" in the Scout trace:

Scout is installed by a developer - it's typically a one-line Git commit to the product code base. DataDog requires a separate agent install, which would typically be managed via Chef/Puppet/Ansible/etc.

Why don't you just tell me which to use?

First, there's no reason you can't use both: it's easy to pull Scout's APM metrics into DataDog for your ops team via the Scout API. This can give an ops team the high-level health view and engineering teams the code-level visibility they need.

What would I do? Try DataDog and Scout at the same time (they don't conflict), then ask: "which tool helps our team solve performance issues faster?"