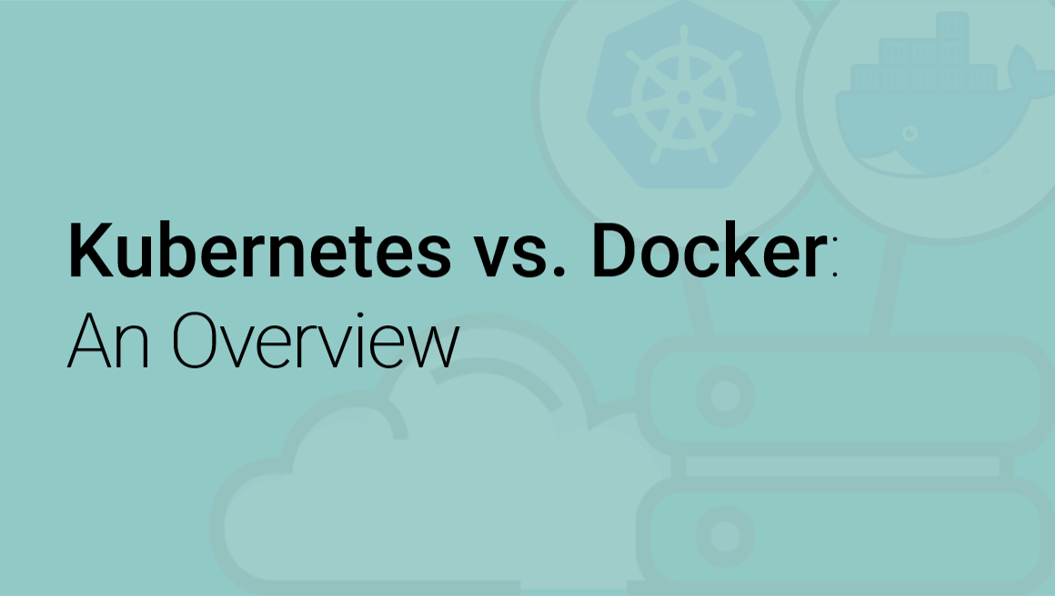 To clear up the confusion around Kubernetes vs. Docker, we’ve written this guide. After reading each section, you will understand what Kubernetes and Docker are, how they work together, and why are they essential to modern application development.

We’re going to cover a lot of ground, so feel free to navigate this guide with the following links:

Overview of Containerization, Kubernetes, and Docker

Let’s start with a brief definition of the concepts at the core of this discussion: Containerization, Docker, and Kubernetes:

Why Use Docker Containers?

Docker containers fit into the microservices equation because they are an efficient way to run each microservice in isolation. Compared to running each microservice on its own virtual machine (VMs), for example, containers are faster to start up, use fewer system resources, and don’t require a separate OS instance.

Here are some of the benefits of containerization for microservices-based architectures:

Using a container orchestration tool like Kubernetes to build a system made up of multiple Docker nodes (with containerized apps running on different OS instances) offers the following advantages:

What Is Docker? Harnessing the Power of Containers In-Depth

When talking about Docker, it’s important to determine whether you’re referring to (1) the docker container file format or (2) the open-source platform that helps developers create, run, and automate the deployment of docker files:

As a containerization tool, Docker’s operation depends on a client-server architecture that consists of several fundamental components:

Here’s how these components work together:

What Is Container Orchestration?

When developing an application architecture or IT infrastructure that consists of several containers, you’ll need a container orchestration tool for managing resources across the system. The simplest of these tools is Docker Compose. Docker Compose allows you to orchestrate, manage, and schedule the deployment of containers for a multi-container system.

Docker Compose is only useful for container orchestration when all of the containers are running on a single Docker node (i.e., a single server instance). Managing and deploying containers across multiple Docker nodes that are running on different OS instances requires more sophisticated tools – like Docker Swarm or Kubernetes – for container orchestration (more on this in the next section).

To sum up this section on Docker, let’s review the most compelling advantages of using Docker containers:

What Is Kubernetes? Enter Container Orchestration

When a microservices-based application (or IT infrastructure) consists of many different containers running on many different servers, managing the system is complicated. This is where the open-source container orchestration tool like Kubernetes can help.

Kubernetes offers an API that developers use to manage and automate requests between containerized apps, deploy or replicate Docker nodes and containers when required, and give more or less processing power to container instances in response to user/client traffic levels. Kubernetes gives you a single command line or dashboard to set the rules that organize your container-based architecture.

Another way to understand Kubernetes is to see it as a “meta-process” that automates and controls the lifecycle of the containerized applications that form an architecture. Developers code this process as a set of deployment instructions rendered in the human-readable programming language YAML. Once the process is set, the Kubernetes deployment supervises and controls incoming requests and performance across the architecture according to the instructions.

By following these rules and limits set by developers, Kubernetes knows when to deploy, replicate, restart, and scale containers (and groups of containers) and how to load balance incoming requests and divert processing power to achieve optimum system performance across the network.

Pods: A pod is the basic unit of deployment within the Kubernetes cluster. A pod consists of a single containerized app or a group of containerized applications that need each other to operate. For example, if a web server requires a Redis caching server, both get wrapped into the same pod – and both get spawned when that particular pod is deployed. Kubernetes’ ability to manage multi-container pods is one of its advantages as a container orchestration tool; however, if a containerized app can run on its own, it can be assigned to a single-container pod.

Worker Nodes (Docker Nodes): A Worker node refers to a single Docker instance running on its own OS instance. A Docker node – which is sometimes called a worker node or just a node – can run a single or multiple containerized applications.

A worker node consists of the following components:

A Kubernetes master node consists of the following components:

Here are some of the most compelling advantages of using Kubernetes for container orchestration:

When to Use Kubernetes vs. Docker Swarm

Final Thoughts on Kubernetes vs. Docker

After reading this guide, you should have a clear understanding of how Docker and Kubernetes work together to build and orchestrate a large-scale container-based application architecture. As a final review of what we’ve covered:

Docker serves as the core of any container-based architecture because Docker allows you to create and automate the deployment of multiple containerized apps on a single OS instance.

When used in conjunction, Docker and Kubernetes can tackle virtually any kind of scaling and container orchestration challenges faced by a microservices-based application or IT infrastructure.

What’s Next After Docker and Kubernetes?

Docker and Kubernetes are fundamental aspects of modern application design – especially when you’re building and maintaining a complex, highly scalable system. However, they are just two arms of a many-armed beast. In addition to these containerization tools, you also need a strategy to monitor the performance of the individual apps and services that make up the system.

This is where ScoutAPM can help. Scout is an application performance monitoring product that helps developers drill down into the fine-grained details of app performance and stability issues. With Scout, you can get to the bottom of the exact cause of N+1 database queries, sluggish queries, memory bloat, and other performance abnormalities.

Want to try Scout for yourself? Contact our team to schedule a demo now!