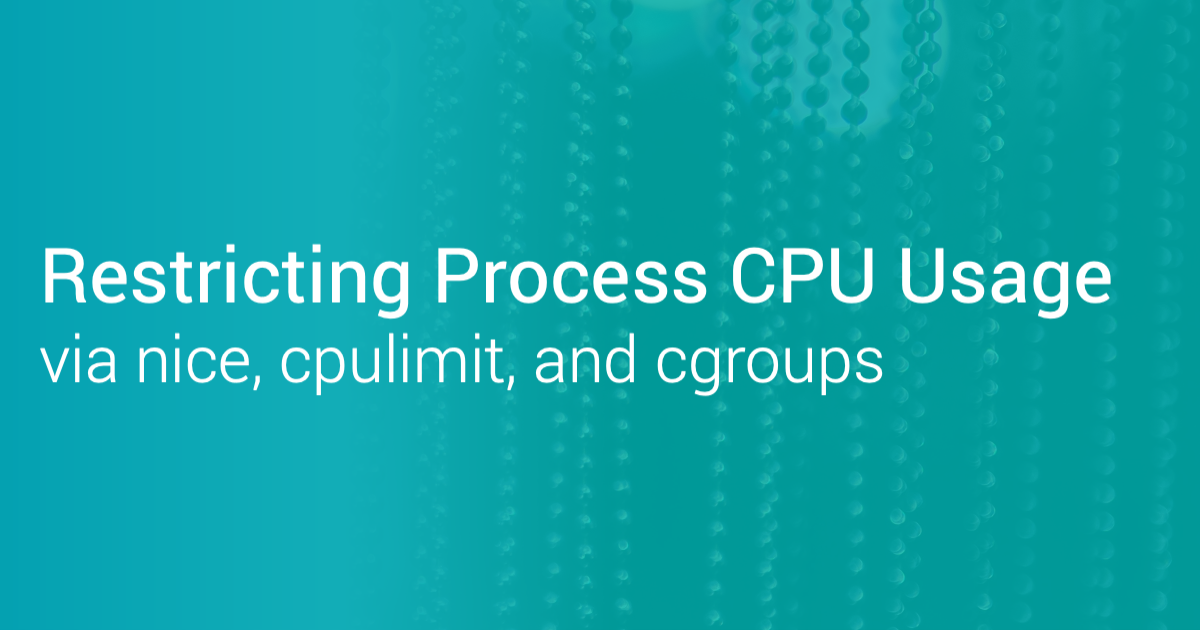 The Linux kernel is an incredible circus performer, carefully juggling many processes and their resource needs to keep your server humming along. The kernel is also all about equity: when there is competition for resources, the kernel tries to distribute those resources fairly.

However, what if you've got an important process that needs priority? What about a low-priority process? Or what about limiting resources for a group of ?

The kernel can't determine what CPU processes are important without your help.

Most processes are started at the same priority level and the Linux kernel schedules time for each task evenly on the processor. Have a CPU intensive process that can be run at a lower priority? Then you need to tell the scheduler about it!

There are at least three ways in which you can control how much CPU time a process gets:

Let's look at how these work and the pros and cons of each.

Before looking at these three techniques, we need to find a tool that will simulate high CPU usage on a system. We will be using CentOS as our base system, and to artificially load the processor we can use the prime number generator from the Mathomatic toolkit.

There isn't a prebuilt package for CentOS so you will need to build it yourself. Download the source code from http://mathomatic.orgserve.de/mathomatic-16.0.5.tar.bz2 and then unpack the archive file. Change directory mathomatic-16.0.5/primes makesudo make install build and install the binaries. You will now have matho-primes /usr/local/bin

Now run top and you will see that the -primes process is using all the available CPU. 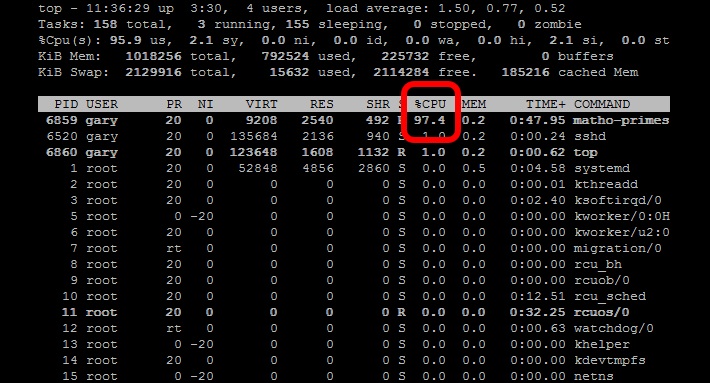 Exit top (press the q key) and kill the -primes process ( to bring the process to the foreground and press CTRL+C).

nice tweaks the priority level of a process so that it runs less frequently. This is useful when you need to run a CPU intensive task as a background or batch job. The niceness level ranges from -20 (most favorable scheduling) to 19 (least favorable). Processes on Linux are started with a niceness of 0 by default. The nice command (without any additional parameters) will start a process with a niceness of 10. At that the scheduler will see it as a lower priority task and give it CPU resources.

Start two matho-primes tasks, one with nice and one without: 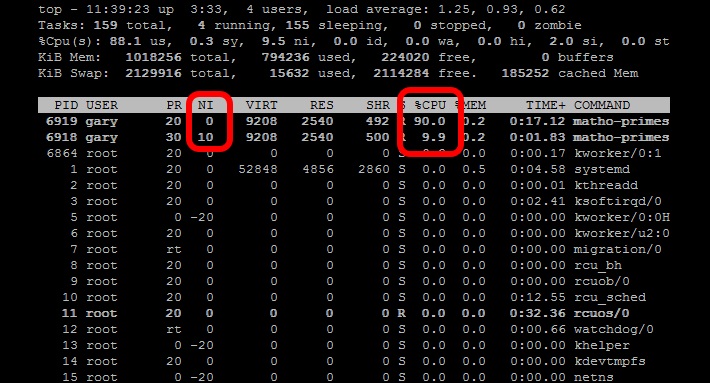 What this means in real terms is that if you want to run a CPU intensive task you can start it using nice and the scheduler will always ensure that other tasks have priority over it. This means that the server (or desktop) will remain responsive even when under heavy load.

Nice has an associated command renice It changes the niceness level of an already running process. To use it, find out the PID of process hogging all the CPU time (using ps) and then run renice:

Donâ€™t forget to kill matho-primes once you have finished experimenting with nicerenice.

cpulimit curbs the CPU usage of a process by pausing the process at different intervals to keep it under the defined ceiling. It does this by sending SIGSTOP and SIGCONT signals to the process. It does not change nice of the process, it monitors and controls the real-world CPU usage.

cpulimit is useful when you want to ensure that a process doesn't use more than a certain portion of the CPU. The disadvantage nice that the process can't use all of the available CPU time when the system is idle.

To install it on CentOS type:

The commands above will download the source code from GitHub, unpack the archive file, build the binary, and copy it /usr/bin

cpulimit is used in a similar way nice however you need to explicitly define the maximum CPU limit for the process using the ‘-l’ parameter. For example: 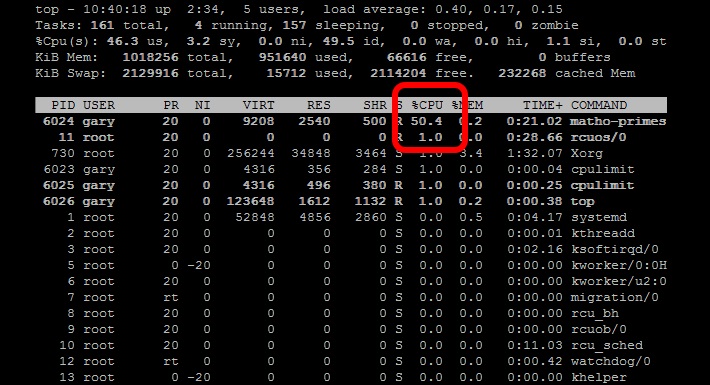 Note how matho-primes is now only using 50% of the available CPU time. On my example the rest of the time is spent in idle.

You can also limit a currently running process by specifying its PID using the‘-. For example

Control groups () are a Linux kernel feature that allows you to specify how the kernel should allocate specific resources to a group of processes. With you can specify how much CPU time, system memory, network bandwidth, or combinations of these resources can be used by the processes residing in a certain group.

The advantage of control groups nicecpulimit that the limits are applied to a set of processes, rather than to just one. Also, nice cpulimit limit the CPU usage of a process, whereas can limit other process resources.

By judiciously using the resources of entire subsystems of a server can be controlled. For example in CoreOS, the minimal Linux distribution designed for massive server deployments, the upgrade processes are controlled by a . This means the downloading and installing of system updates affect system performance.

To demonstrate , we will create two groups with different CPU resources allocated to each group. The groups will be called "" and ""

The groups are created with the cgcreate command like this:

The controller has a property known as .shares. It is used by the kernel to determine the share of CPU resources available to each process across the . The default value is 1024. By leaving one group () at the default of 1024 and setting the other () to 512, we are telling the kernel to split the CPU resources using a 2:1 ratio.

To start a task in a particular you can use the command. To test the two , start -primes in the group, like this:

If you top will see that the process is taking all of the available CPU time. 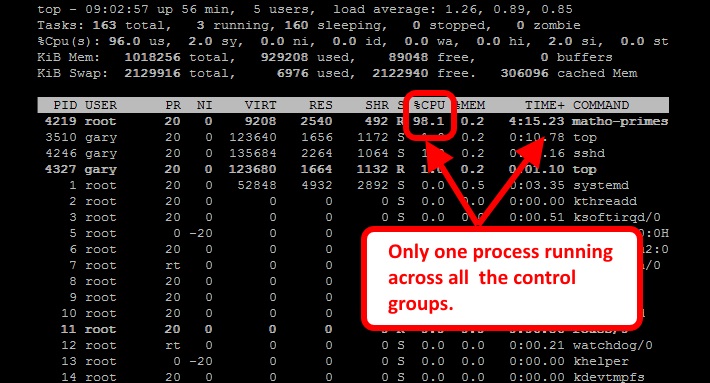 This is because when a single process is running, it uses as much CPU as necessary, regardless of which it is placed in. The CPU limitation only comes into effect when two or more processes compete for CPU resources.

Now start a second -primes process, this time in the group:

The top command shows us that the process in the with the greater value is getting more CPU time. 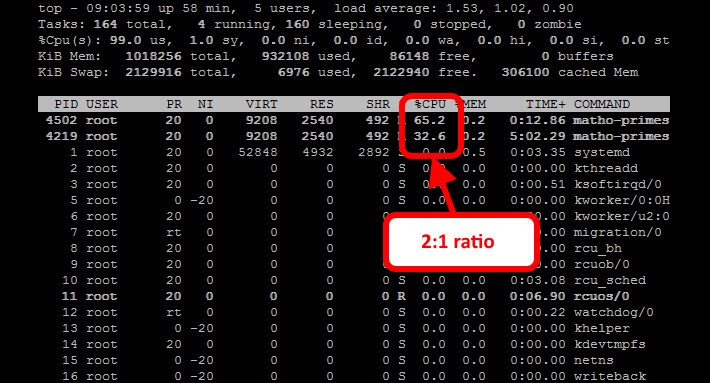 Now start another -primes process in the group: 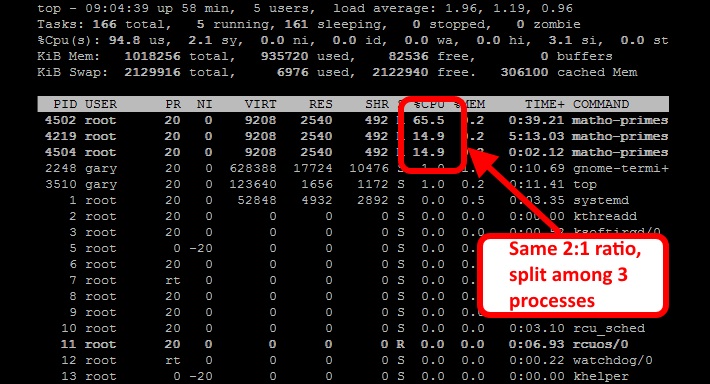 Observe how the CPU is still being proportioned in a 2:1 ratio. Now the matho-primes in the group are sharing the CPU equally, while the process in the other group still gets more processor time. 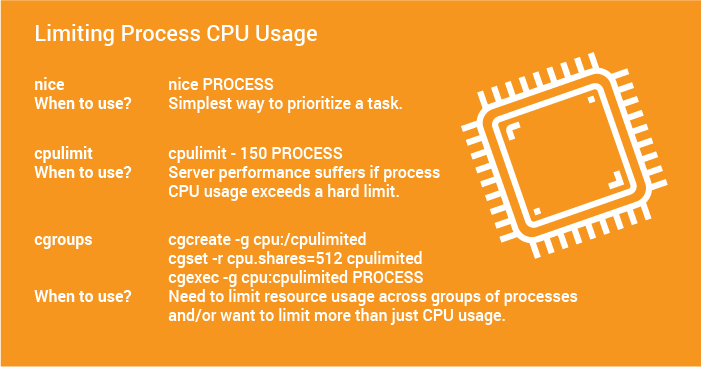 The finite resources of any server or desktop are a valuable commodity. The tools described above help you manage those resources, especially the CPU resource:

Adding servers can be a band-aid for slow code. Scout APM helps you find and fix your inefficient and costly code. We automatically identify N+1 SQL calls, memory bloat, and other code-related issues so you can spend less time debugging and more time programming. We have Ruby, Python and Elixir agents.

Updated version of an article first published on November 4th, 2014.