Get notified of slow Rails web requests with Scout

When something bad happens you want to find out about it as quickly as possible.

You’re probably notified of uncaught exceptions. What about slow web requests, which can be just as annoying to a user?

Find about about slow web requests (and what might be causing them) in near real-time using Scout and the Ruby on Rails Request Monitoring Plugin.

Here’s how it goes down: 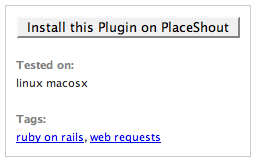 ...that’s it – you’re no longer a performance slacker.

If you have a slow request, an alert is generated. You can view the offending requests and their request times:

View Web Requests on a Graph

You can easily graph this data as well with Scout’s built-in graph builder:

Compare to other Rails applications

...but that’s not all. You probably have multiple Rails applications. You can compare their performance on a single graph as well:

Look for trends against other data

...we’re not done yet though…how about comparing the average request time vs. the size of the mongrel threads through the Process Usage plugin?

Since it’s easy to plot different data stats on Scout, you can quickly rule out possible reasons for slow performance. That’s half the battle.

We’re launching Scout this winter. Signup on our homepage, and we’ll give you access to Scout before the public launch.