New Relic vs. Scout: Which Is The Right APM For You? 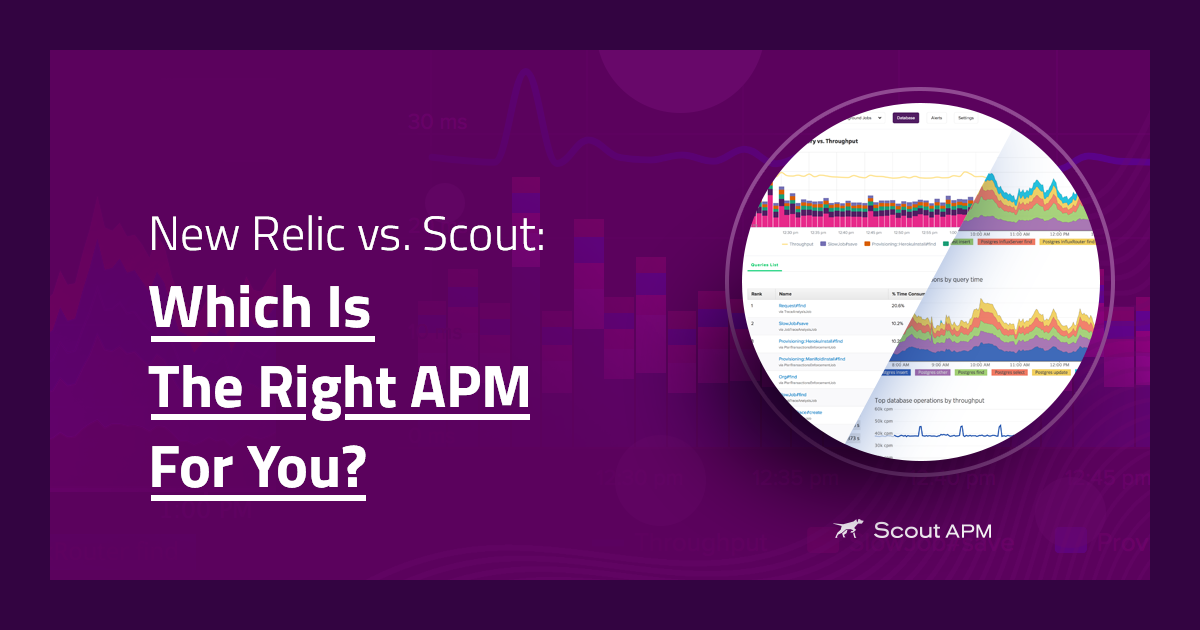 There's no type of monitoring tool that can get to the heart of a performance problem faster than Application Performance Management (APM).

If you're making this decision, you may be choosing between New Relic and Scout. There are cases where New Relic is a better fit, clear cases where Scout fits like a glove, and some murky situations as well. Where do you fall?

Below, I'll summarize the factors to consider when choosing your best APM product.

Let's start digging through the products, starting with the app overview.

This is the first page you see when checking the health of your app. New Relic's version is on the left and Scout is on the right: 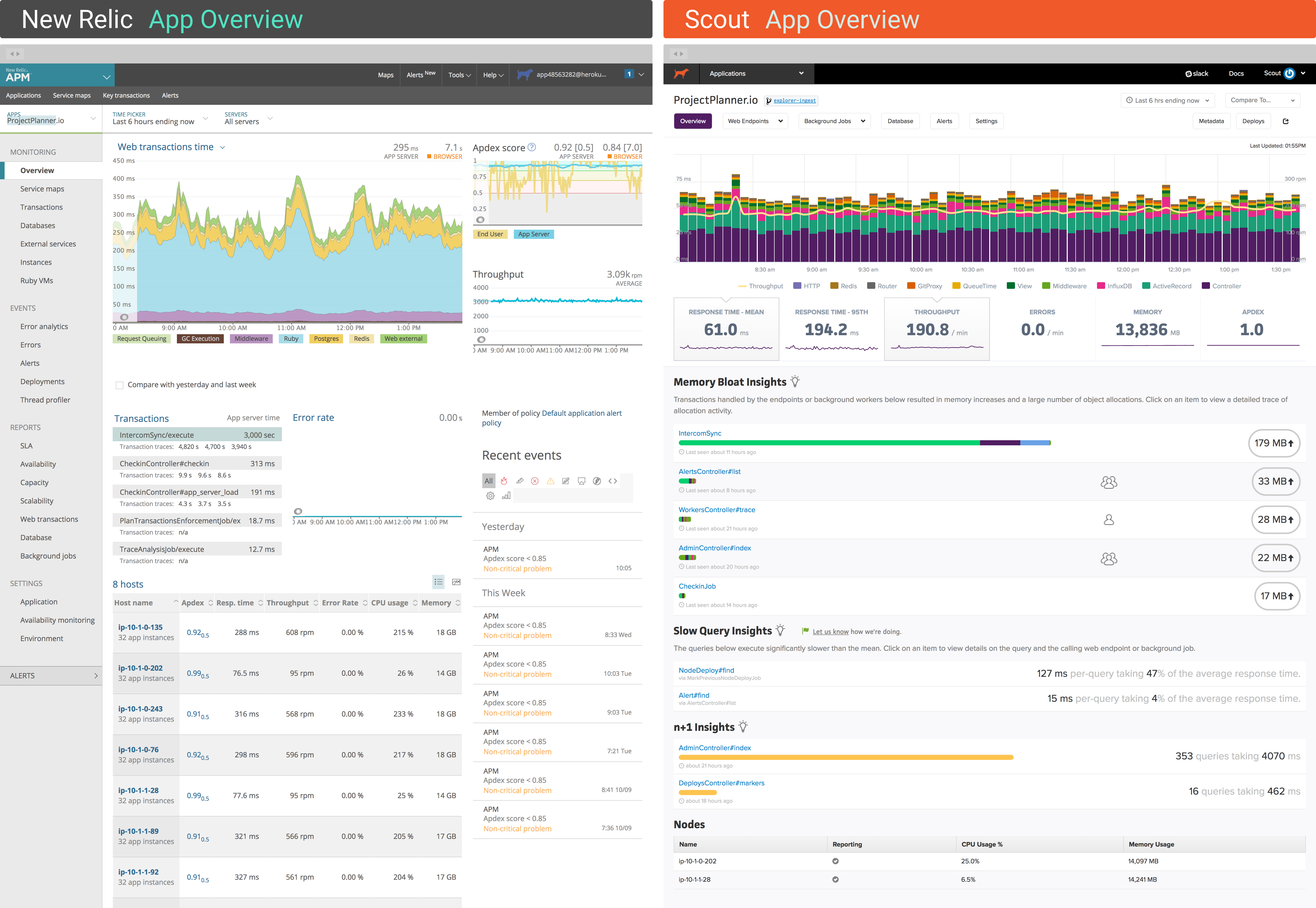 The top portion of the page is similar between New Relic and Scout: a breakdown of time spent by category (ex: Ruby, Database, External HTTP services, etc) over time. You can view data across similar timeframes in both Scout and New Relic (New Relic offers three months of data in their Pro package and Scout can do the same in their custom plans).

Both let you compare data to the past. Scout gives a few more options than New Relic, which is restricted to yesterday and last week comparisons.

The biggest difference with Scout's approach: several algorithms dig through your data and generate insights on performance directly on this page. For example, Scout identifies slow database queries, N+1 database queries, and memory bloat. These are ordered by impact, which help you decide where to get most improvements in the least amount of time.

Scout short-circuits the work a Site Reliability Engineer (SRE) often performs when investigating the health of an app.

Let's move from the 10,000 foot view to the soul of application monitoring.

The soul of app monitoring is the transaction trace: all the metrics and analysis an APM platform delivers originates from data collected in a trace. A transaction trace is a breakdown of time spent in a single web request or execution of a single background job.

A New Relic trace is on the left and Scout on the right: 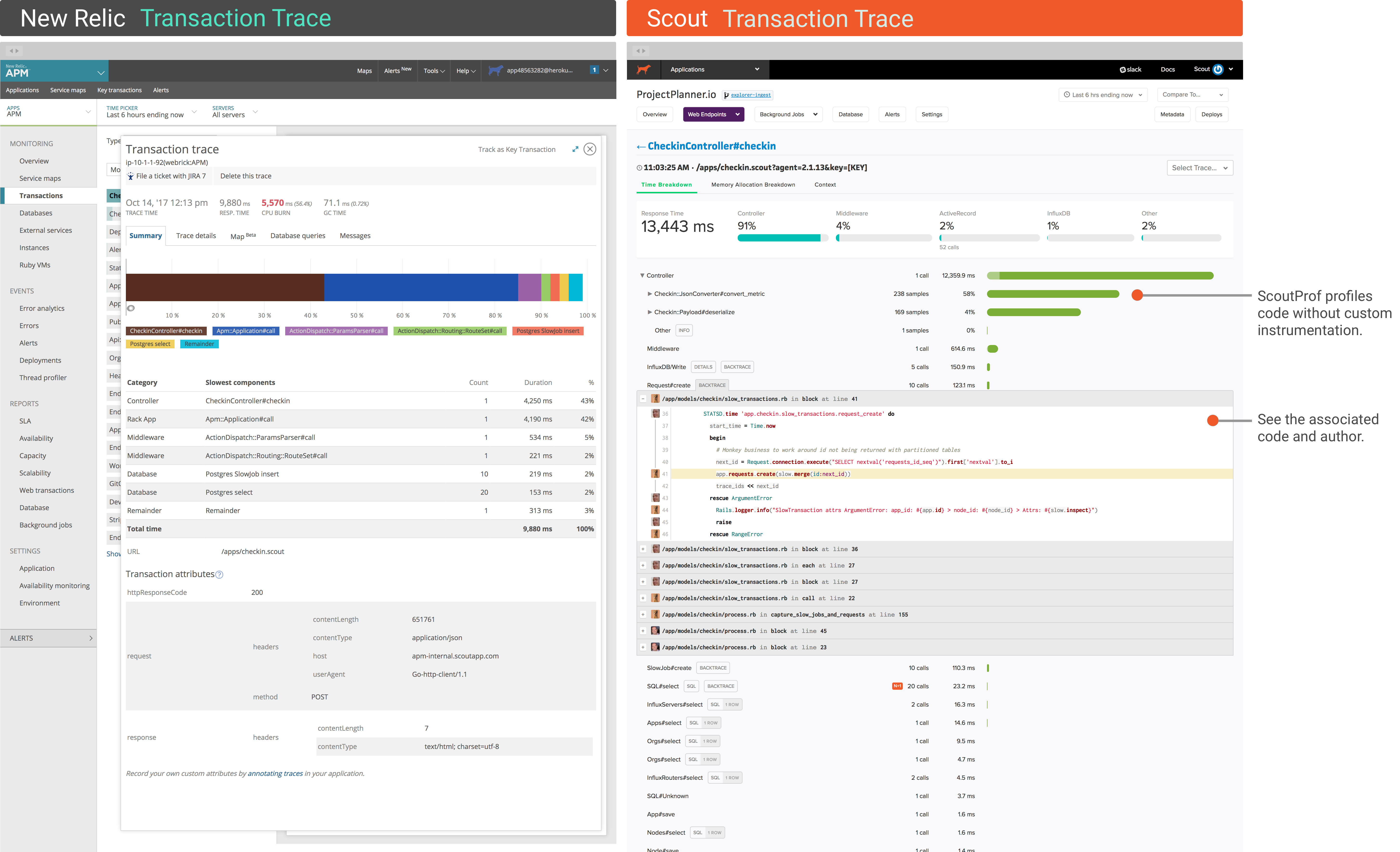 There are some differences here as well:

Both New Relic and Scout let you view summary data on web endpoints in list format. New Relic on the left, Scout on the right: 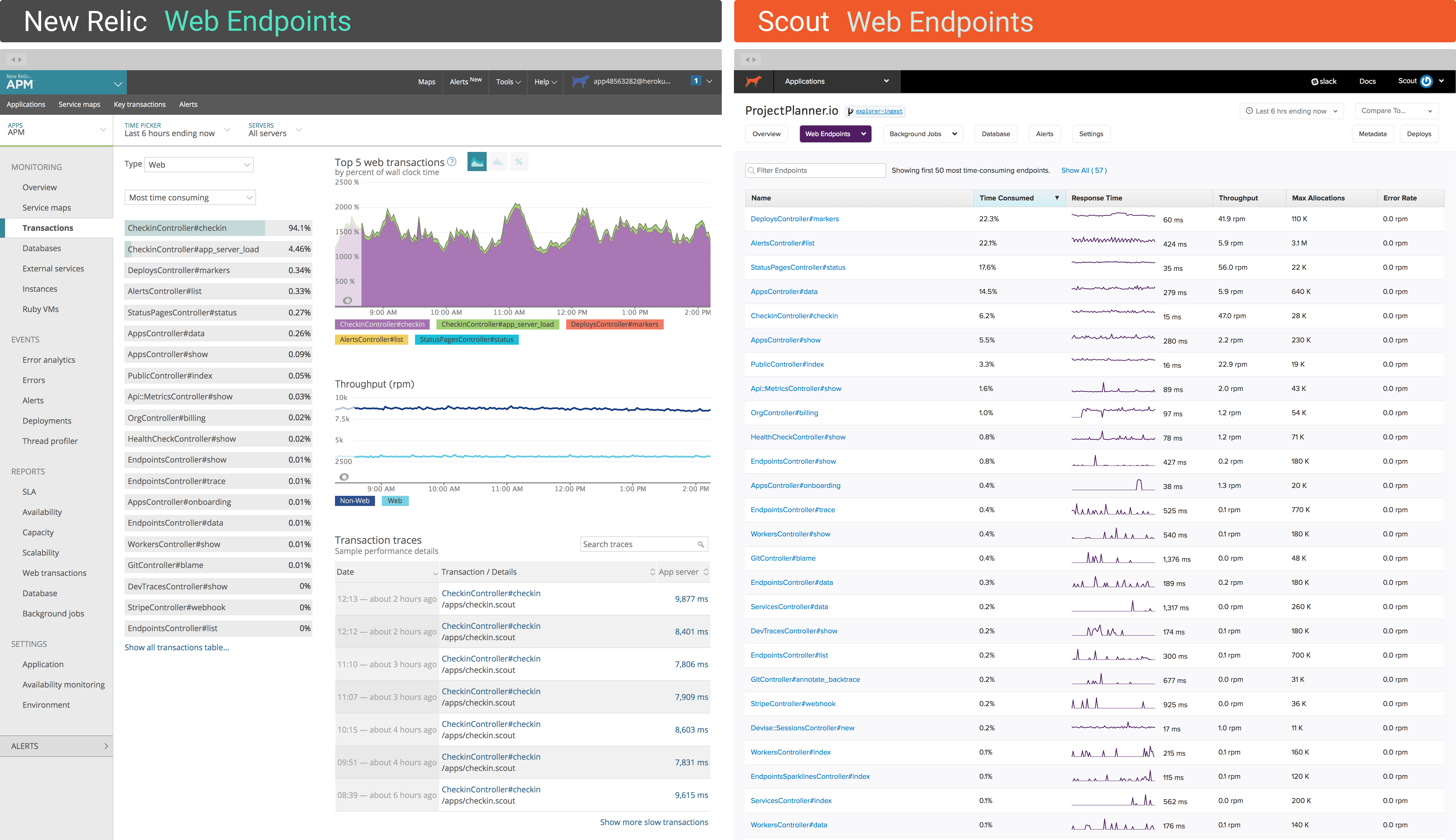 Both sort web endpoints by percent time consumed by default, helping you focus on the controller-actions that consume the greatest amount of time.

In the same way the app overview provides a breakdown of time spent, both New Relic and Scout offer endpoint-specific views for this: 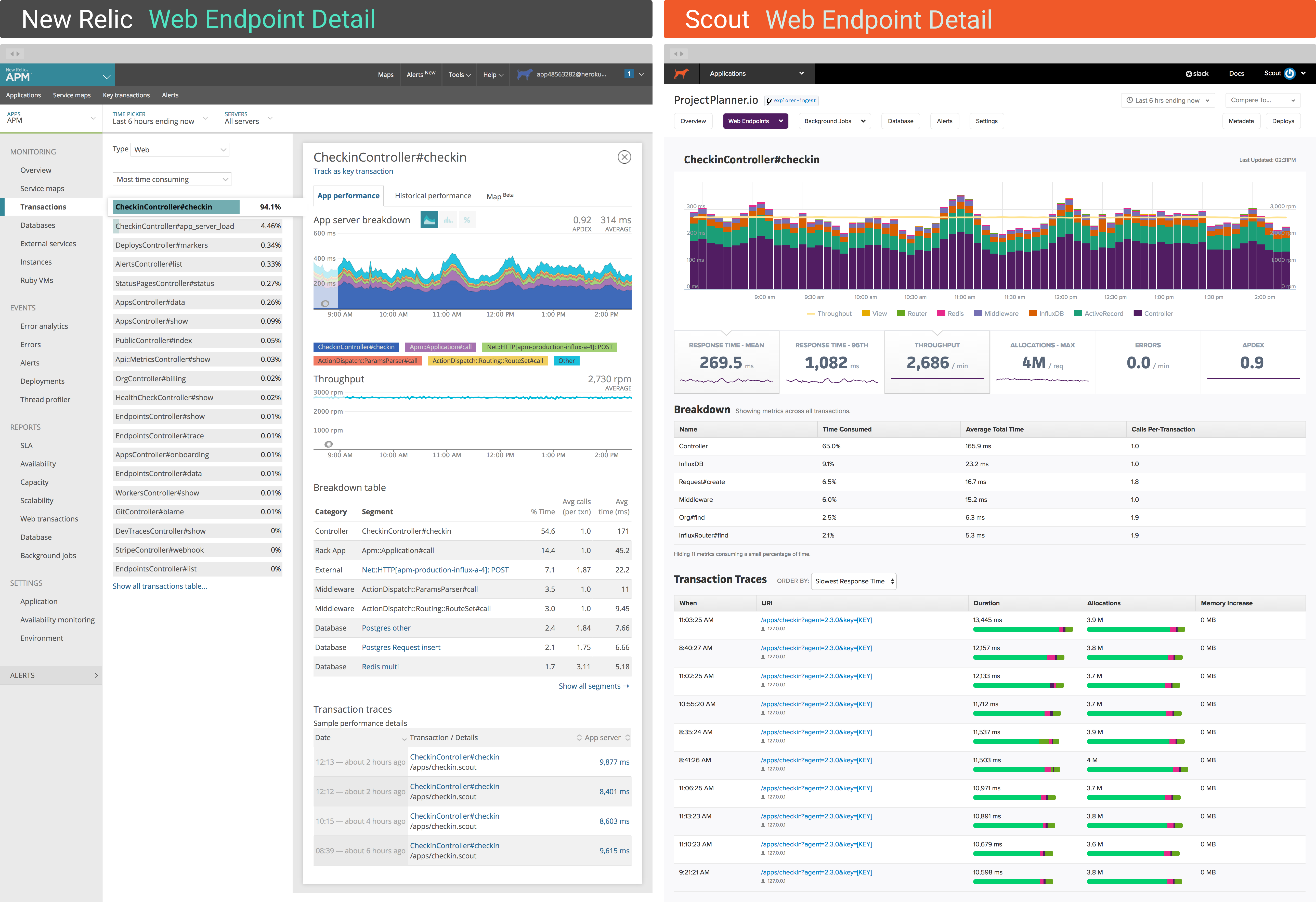 There are some differences on this page:

Both New Relic and Scout monitor the core Ruby background job frameworks: Sidekiq, Delayed Job, and Resque. The UI is similar to endpoints, so I haven't provided a screenshot here.

The database is the most common bottleneck for web applications. Since a database is a shared resource, one expensive query may cause many other types of queries to run slower. New Relic and Scout provide additional analytics around database query performance:

Both of the UIs resemble each tool's web endpoints display, but made specific for database queries. There are some subtle yet important differences between the two: 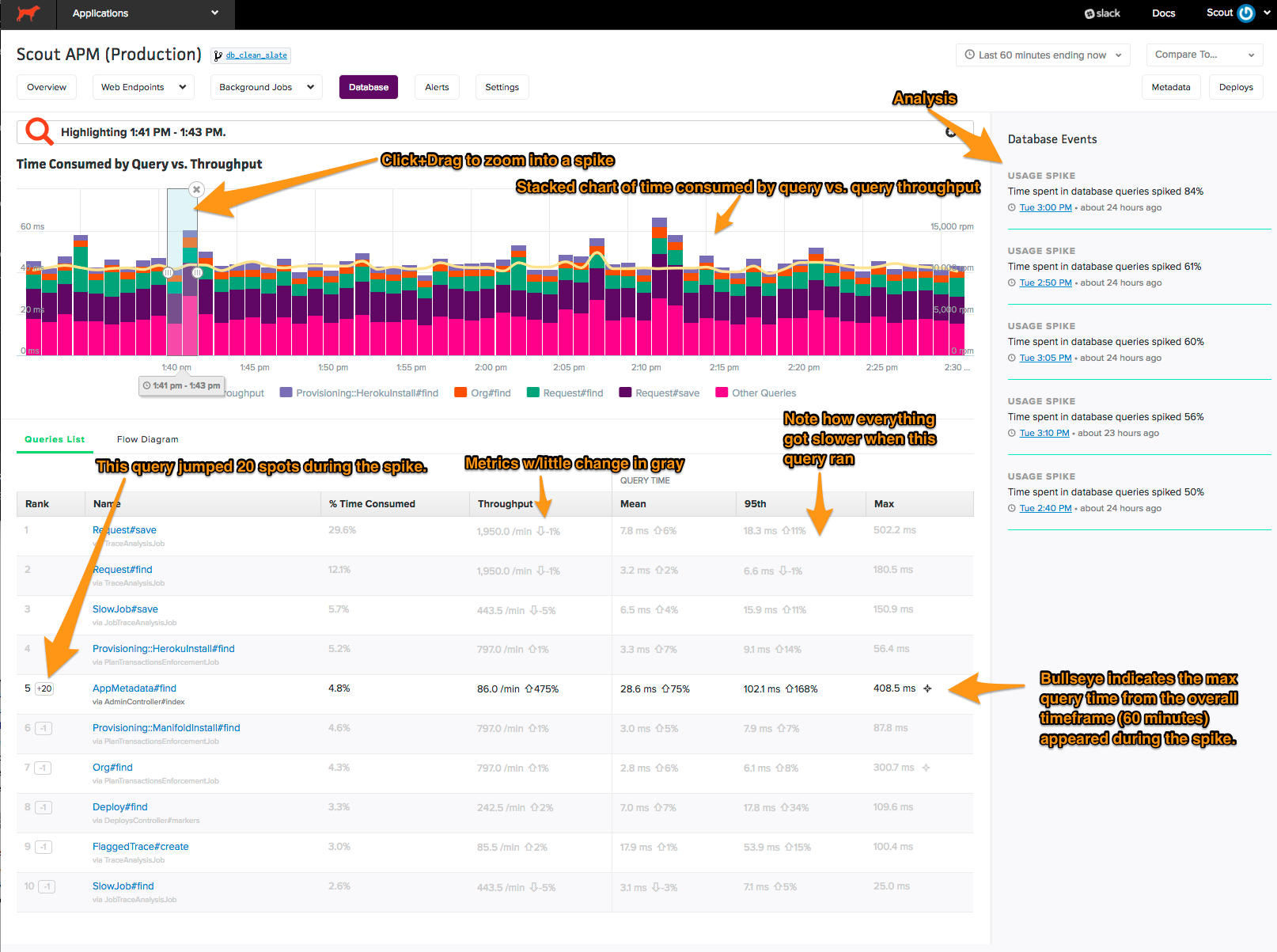 When you are actively resolving a performance issue, it's helpful to get immediate feedback on the results as you code. Otherwise, you need to deploy and wait for fresh data to verify the change had the intended impact.

New Relic used to have a developer mode, but it has since been removed from the agent.

Scout DevTrace gives immediate access to traces in your local development environment by clicking on a speed badge in the lower left of your browser: 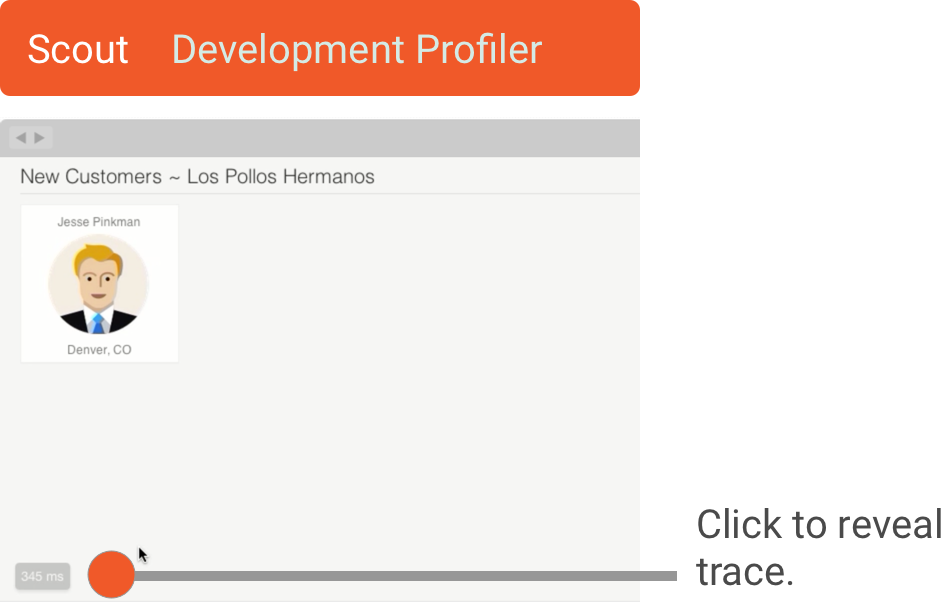 A recurring report of your app's health is a great way for managers to stay in the loop on performance and to uncover slowly building problems. New Relic puts more emphasis on high-level numbers. Scout digs more into the source of problems and trends:

Both the New Relic and Scout agents are battle-tested. In Scout's open-sourced benchmarks, Scout's agent was shown to have lower overhead:

The impact of agent overhead increases as CPU resources on your app servers becomes more scarce.

Scout tracks error rates and integrates with third-party services like Rollbar to provide details on exceptions. New Relic can provide this data, including backtraces to exceptions.

Why don't you just tell me which to use?

New Relic and Scout require little configuration - outside adding a dependency - to try. You can run Scout and New Relic at the same time without causing conflicts.