Flask vs. Django - Which One Outperforms the Other? 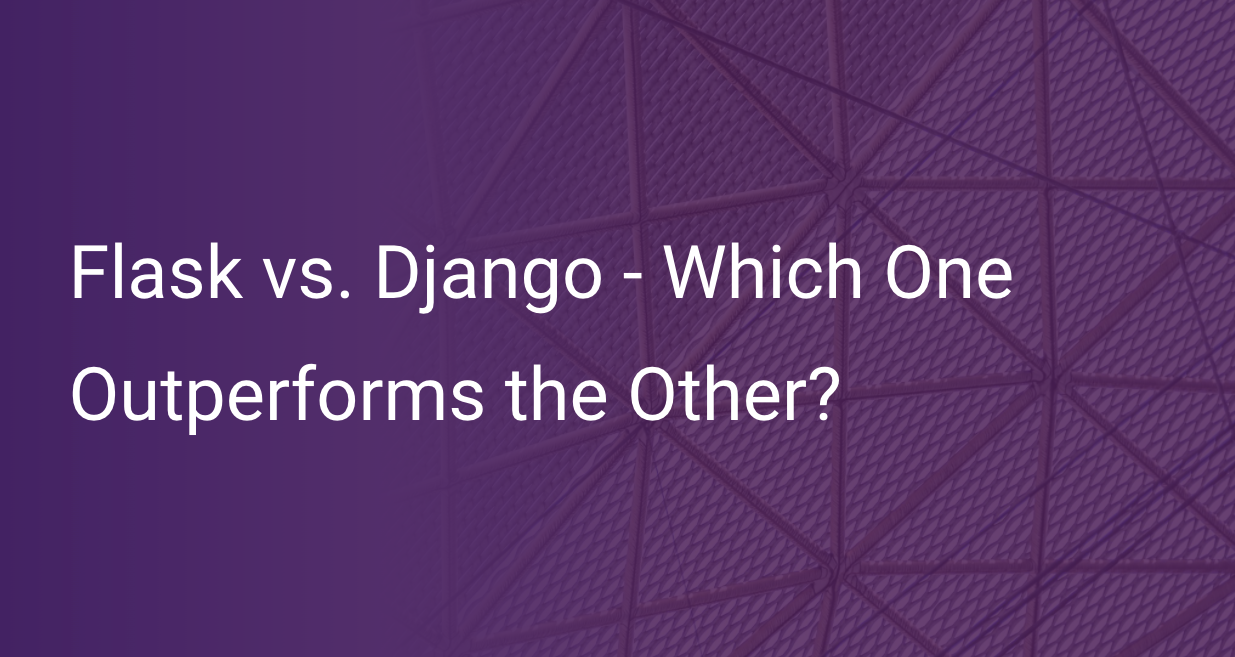 Flask vs. Django - Which One Outperforms the Other?

Flask and Django are two of the most popular Python packages. More importantly, they are the two most preferred web frameworks you can use with the language.

Both frameworks are open-source and offer excellent APIs for developers to build robust Python web applications. While both frameworks serve the same purpose, they take two philosophically opposed routes to achieve it. While Django offers a stable, all-inclusive toolkit for the many different aspects of backend programming, Flask strips away most of the fluff. It focuses on the barebones and core features through a lightweight and highly flexible API.

Even though Django came out earlier (in 2005) and likely runs more applications today (if the number of StackOverflow questions can be considered a valid indicator), both frameworks have extensively risen in popularity in the last decade. Despite their fundamentally different approaches, it is fascinating to see how they have established themselves as industry leaders.

If you are here to choose one out of these two for your application, your decision solely depends on what you want out of a web framework. This post will compare Flask and Django on aspects that matter the most to developers and organizations – ease of use, flexibility (or stability), feature sets, performance, security, popularity, etc. We hope this gives you a helpful overview of how these frameworks contrast to make an informed decision.

Flask is a minimal, lightweight ‘micro-framework’ for Python known primarily for its simplicity and flexibility.

As far as simplicity is concerned, it ships only with the barebones of an effective backend framework — with core features like URL routing, request/response, error handling, a template engine, unit testing, debugging support, and a development server.

Additionally, it is incredibly beginner-friendly, easy to set up, and requires minimal experience to get a web server up and running. All of this makes Flask the go-to choice for building quick prototypes and proofs of concepts for larger-scale applications.

Moreover, Flask is flexible in that it does not enforce many constraints on the application architecture or the extensions with which it can work. It provides developers with the freedom to choose their preferred tools (or develop custom solutions) or mix and match the additional functionalities (on an as-needed basis). However, it’s important to note that flexibility comes at the cost of non-uniformity (impacting scalability). We’ll talk more about this later.

Regardless, the virtues mentioned above have earned Flask a spot as the most popular Python web framework by 2021 developer surveys from Stack Overflow and JetBrains. Furthermore, Flask also powers popular applications such as Netflix, Reddit, Lyft, and many more.

Sidebar: Flask is also known for its source code being an exemplar of a clean, well-structured Python project.

Django is a full-fledged web framework for Python released even before Flask in 2005. Django follows/enforces a Model Template View (MTV) architecture and is known for its all-in-one approach and the consequent stability (through uniformity).

In contrast to Flask’s focused approach of providing only the most essential features, Django goes the all-in-one route. It ships with everything you could need to create a web application of any complexity. Django offers support for additional features like authentication, authorization, database ORM, admin panels, sessions, messages, and more. This makes it a good choice for developers who want a one-stop solution for all their back-end web development needs.

Stability and Uniformity (over Flexibility)

Because Django provides in-house support for most additional features, developers don't need to worry about looking out for effective third-party solutions for extending functionalities. They also don’t need to worry about cross-compatibility or any shortcomings of external libraries that could introduce loopholes in their application. This uniformity through native component support makes the development pipeline more stable. Moreover, Django also eliminates the effort otherwise involved in setting up these third-party tools.

Django is a top preference for developers who want to build full-fledged, complex, scalable Python web applications for all these reasons.

Even though Django falls marginally behind Flask in recent popularity based on famous developer surveys, the former has throughout been ~3x more trending on Stack Overflow trend charts. Django also runs two of the most popular social media giants like Instagram and Pinterest and Disqus, National Geographic, Mozilla, and more.

How the Two Compare

Now, let’s compare the two frameworks side by side.

By design, Flask chooses to be minimally sufficient in functionality and allows developers more control over their application — the independence to select their own feature extensions (databases, ORMs, authorization, authentication) on an as-needed basis. Django, however, provides a defined path forward — with all the additional capabilities a developer would want, and therefore wants the code to be structured in a particular way to leverage these features in more constrained settings. This approach keeps your codebase stable and easier to maintain and scale.

This blog post by Testdriven.io offers an interesting analogy here that compares Flask and Django to bikes and cars, respectively. Expanding on that, both get the job done (getting from one place to another/building a robust backend). Still, one (bike/ Django) is conservational and solely focused on the core essentials to enable viable transportation (build an MVP). In contrast, the other (car/Django), luxuriously, single-handedly provides you with all the support you’ll need for your trip (backend).

Even though lighter is theoretically faster, Flask only marginally beats Django in speed. On paper, Flask is a (2.5x) smaller framework with fewer layers and will therefore be slightly faster. However, one can easily reduce this minor difference by maintaining good coding practices and investing in decent hardware resources. Moreover, Django comes equipped with features that promote rapid development. This minimizes any gap between the two frameworks even more.

Because of its minimality, Flask is easier to learn and get started. For instance, it’s much more intuitive and noncomplicated to set up a basic “hello world” application in Flask with just a few lines of code; as opposed to Django’s ‘startproject’ command, which creates a bunch of different files (for app settings, URL routes, and other configurations).

However, if you are in it for the long game, spending some time understanding how to work with Django proves to be worth the effort.

With Flask, you can work with whichever type of database and mapping solutions you like – through extensions and libraries of your choice. For example, Flask-SQLAlchemy is a popular library for Flask users for managing database interactions using SQLAlchemy, a famous ORM for Python.

Django doesn’t officially support non-SQL databases, so Flask would be an excellent non-restrictive option. However, if you are working with a relational database, the caveat to this independence would be overcoming the associated learning curve (if you are a beginner) and setting up everything yourself.

Flexibility comes at a cost.

Django is one of the more secure frameworks and has implementations in place that provide protection from common attacks such as CSRF (cross-site request forgery), XSS (cross-site scripting), and SQL-injection.

On the other hand, there is no such standard support in Flask. Continuing the same story as before, several third-party extensions (e.g. Flask-security) help establish security protocols but require additional setup. This reliance on third-party, non-standard functionalities most of the time can eventually catch up to your application. For instance, if these extensions are not maintained as much or have undiscovered vulnerabilities, they could open up potential loopholes.

A template engine allows developers to use static templates and inject data into variable placeholders. This proves to be a valuable feature for returning dynamic web pages to the client.

Flask and Django come equipped with broadly similar template engines — Flask uses Jinja2, whereas Django ships with its own. Both frameworks also support the serving of static assets.

Both Flask and Django do justice to the DRY (don’t repeat yourself) programming principle and enable developers to write reusable, modular code components and group functionalities — through blueprints and ‘applications’. Like the framework itself, Flask’s blueprints are simpler and easier to get started with. You can read more about blueprints here and apps here.

Another feature that Django offers out of the box is an administrator panel. Django’s admin panel is a user interface for a model-centric overview of your application. It serves as an organization’s internal tool for allowing trusted users to manage site content.

Flask developers, as usual, rely on external tools such as Flask-Admin for incorporating similar functionality.

Authorization and authentication in these frameworks follow a similar trend — i.e. are built-in with Django but require external libraries with Flask.

As far as their communities are concerned, Django has received more activity on Stack Overflow (~300k questions vs ~50k questions). 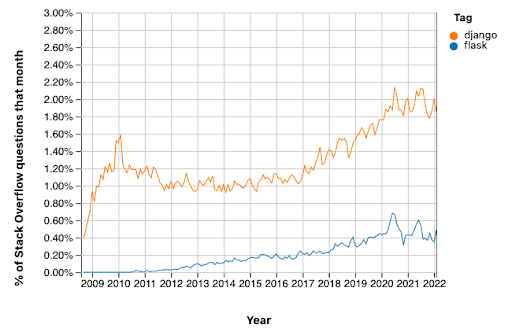 On Github, however, both projects have received a fair share of open-source community strength.

Even though Flask has been doing slightly better popularity-wise in recent years (Stack Overflow and JetBrains 2021 developer surveys), it seems evident that Django-related discussions span a larger surface area on the internet. Regardless, you’ll receive ample help from the community on any platform with these two popular frameworks.

Which Framework is Right for You?

As I have implied time and time again in this post, there is no winner here. Both frameworks were born with different philosophies, preferences, and use cases in mind. Therefore, it is vital to keep in mind your organization and application requirements, time, knowledge, budget constraints, and use cases before you make a call.

Do you prefer a tool with extra functionalities built-in or the flexibility to choose the components of your liking? Do you want to build a complex application or a simple, small-scale one? Do you prefer stability or flexibility?

You should likely choose Flask for small-scale, simpler applications, MVPs, quick prototypes, and organizations that want more fine-grained control over their project components, whereas Django for larger-scale, complex projects that can work with its predefined assumptions.

If you care so deeply about choosing an apt framework for your application, you surely would appreciate the importance of monitoring its performance. Get started with effective Application Performance Monitoring (with real-time alerts and insights) for your Python applications with a 14-day free trial of Scout APM (no credit card needed).