How to Find, Fix, and Prevent Node.js Memory Leaks 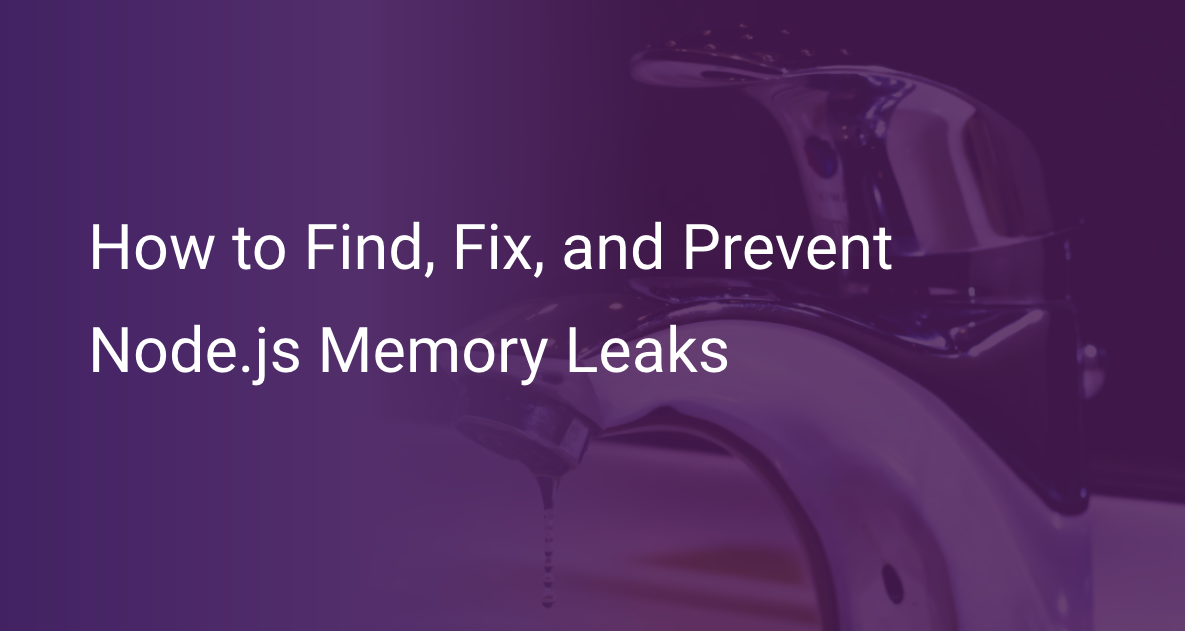 How to Find, Fix, and Prevent Node.js Memory Leaks

This blog post will look at what memory leaks are and how to avoid them in Node.js applications. Feel free to navigate the post using these links:

What are Memory Leaks?

A memory leak is a condition that occurs when a program doesn't release the memory it allocates, i.e., step 3 of the lifecycle is not carried out. For instance, the system assigns memory locations to store values for the variables that we declare inside our program. In programming languages such as C/C++, we can allocate additional memory to hold the data and variables required. But, it's our responsibility to deallocate the memory after usage.

So, in certain conditions, the Garbage collector misses reclaiming the allocated memory, leading to a memory leak in Node.js (Javascript ecosystem). Now let us look into why it happens and how we can avoid them.

Why Do Memory Leaks Happen in Node.js?

Scopes in JavaScript determine the visibility of a variable, function, or object during runtime. Javascript has two types of scope: local and global.

There are also global scope variables in the JavaScript root document (window object). This means that all functions of the document can access the variable defined in the window/root document in JavaScript.

Now, if we use a variable inside a function without declaring it, it will create an automatic or accidental global variable.

Since the root node has reference to the global variables in JavaScript (i.e., global this or window), they are never garbage collected throughout the entire lifecycle of the application. So, they will not release the memory as long as the application is running.

Let's walk through each step in the above example and understand the potential sources of memory leaks. First, we call the parent function that creates a local variable "a" and returns to the inner function with a pointer.

Here, we can see that the ‘runTimer’ function has setTimeout timer with an object reference. So, every time it executes the callback, it gets re-initialized. Because of that, the garbage collector doesn't reclaim the object’s memory even though we remove the object reference. So, it can potentially lead to a memory leak in the application.

Javascript uses event listeners to handle events in DOM elements. For example, we can add an event handler to the “onClick '' event of a component. However, if a DOM event and its corresponding event listener do not match the event lifecycle, it may lead to a memory leak.

What about Garbage Collection?

In high-level languages like JavaScript, automatic memory management, known as garbage collection, is used. The utility relies on the concept of reference.

The Garbage Collector (GC) traces the object reference from the root and marks all the nodes that are reachable from the root. If there are non-reachable objects by the root object, it considers them garbage and reclaims their memory. GC mainly uses two algorithms. They are:

Reference Counting is a native garbage collection algorithm. It first checks if an object has any references to it. If there are none, those objects are marked garbage collectible and collected in the next cycle.

The Mark and Sweep Algorithm is different from the Reference Counting algorithm. This algorithm checks if an object is reachable from the root node in the memory. If not, the GC releases the memory for the object.

While the improvement brought by the Mark and Sweep algorithm improves memory management, it does not prevent leaks entirely. There can be objects that are reachable by the root but not in use anymore. There is no way for the algorithm to mark those as garbage collectible.

Another downside of GC is that it consumes additional resources to process the automatic memory management and decide which memory space to free. Therefore it can slow down the application because of its resource requirements.

To understand the business cost of memory leaks, let me share my experience from my previous organization. The company that I worked for was building a SaaS product, and it had thousands of customers on the platform. In addition, there was a development team working on building the initial version of the product.

Eventually, customers started complaining because of the bad user experience, and the churn rate became high.

Adding to the complexity of the situation, identifying the memory leak became difficult for us. It used to vanish after we restarted the server. But we knew that the crash was happening because there were not enough resources such as memory or CPU for the application. So to fix that temporarily, we threw more RAM into it.

It affected our business negatively. It cost us more money as well as posed a terrible experience for our customers. So, a memory leak as such holds the potential to affect a business quite direly. This issue has wreaked havoc in environments as large as Amazon Web Services.

How to Detect Memory Leaks

You can detect memory leaks using many methods. Also, it is important to diagnose a memory leak in the codebase before you can fix it. To do that, you have several language-specific libraries, tools, and APMs to your aid. You can use these to track the application metrics such as memory and CPU usage and identify the fault.

Use Tools to Your Advantage

In this section, we will discuss a set of tools that you can use to identify memory leaks in Node.js.

Scout APM is a monitoring tool that can trace resource usage and memory bloat. Getting started with Scout is as simple as installing a package.

After that, it is time to add a simple route in express.js with a memory leak.

On load testing with 200 requests per second, we can see that resources become occupied, resulting in crashing the application.

You can monitor that memory bloat in Scout with a simple and elegant user interface.

Heapdump package dumps v8 heap for later inspection. It takes a memory snapshot using heapdump and helps to profile it for performance bottleneck and memory leak.

To begin, add the heapdump dependency in your project.

Now, add it to your root project.

It captures the memory snapshot as a dump. Then, it stores it as a file, or you can use the console to see the results.

To get started with it, install node-inspector globally.

Now, you can debug using this command.

Nodejs runtime process provides a simple way of monitoring memory usage in the application. This is how you can log its details.

The method returns the data with the metrics. However, it’s not recommended in production since it opens as a page to show the data. These are the metrics that you get in the output.

Allocation sampling has minimal performance overhead, and you can use it to analyze long-running operations.

Use the following command to inspect the application.

You can then open DevTools for Node in chrome using.

Finally, click on Open dedicated DevTools for Node to start debugging your code.

How to Fix the Memory Leak Once it’s Located

Now that we understand the reason behind the memory leak, we can fix it in our code. While doing so, you will realize fixing the memory leak is somewhat easier than diagnosing it.

As discussed above, assigning a value to a variable without declaring it creates an accidental global variable. Javascript hoists it as a global variable that has value and is not in a local scope.

To avoid that, you can use strict mode in javascript. Using the keyword 'use strict' will help prevent errors such as assigning value without declaring it. If you use a transpiler like a Typescript or Babel, you don't need to specify it as it is the default choice in the transpiler.

In the latest version of Nodejs, you can enable strict mode globally by passing --use-strict flag when running the commands.

Also, you can use global variables with 'const' instead of 'var.’ 'const' helps avoid accidental overwriting. Also, 'const' is block-scoped, whereas 'var' is the global scope.

Closures can cause memory leaks in the application. Let us see how with an example.

Here, we have a function 'parent', which has two functions: ‘child' and another unnamed function. We assign the global variable to the local scope 'elem’ and the parent function returns an empty function here.

Even though the returning function does not use any local scope variable, it references 'elem' here since it shares the same context as the 'child' function. This is because a Lexical environment is common for child functions. So, it causes a memory leak in the application.

We can fix it by nullifying the local variable that has to reference its global variables. In that way, we can avoid unused references inside the closure environment.

When using timers and closures, always make sure you pass the reference only if there is any use inside closures or timer events. If it's a large object or array, try to destructure and pass only the required fields.

Avoid mutation as much as possible. Immutability is better to avoid unnecessary reference that leads to a memory leak in the application. Use ‘Object.assign’ to copy the object to prevent mutations. We strongly recommend using local scope instead of global.

Can We Avoid Memory Leaks to Begin With?

We can follow the best practices and guidelines to avoid memory leaks in the first place. But, it is difficult to avoid it entirely at the beginning itself. In addition, there are chances that some codebase may have a potential memory leak once the application starts to grow. So, it is an aspect that we need to monitor and analyze constantly.

This is where tools like Scout APM come into the picture. Instead of monitoring and benchmarking the codebase manually, Scout can do that for us and save a lot of time. Here's an exciting story of how the meteor team diagnosed a memory leak and fixed it. This example shows that memory leaks can be weird and often random; therefore, it is best to have ample observability of your application’s performance all the time.

A memory leak is one of the most common performance bottlenecks in modern applications. A potential memory leak can badly affect the application and business. So, it is essential to address such issues adequately to control the damage to your business.

However, the hardest part of the process is not fixing the memory leaks but diagnosing them. This is where performance monitoring tools come in handy. APM tools help detect the memory bloat early, which helps avoid potential memory leaks.

For more in-depth content around web development and a reliable tool for optimizing your application’s performance, navigate our blog and feel free to explore ScoutAPM with a free 14-day trial!