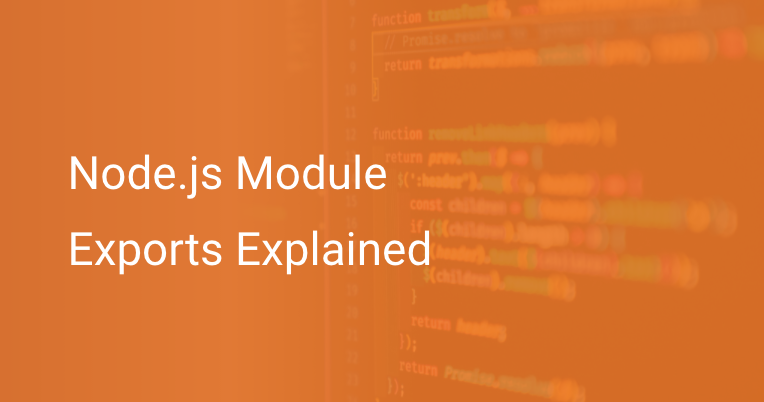 As Donald Knuth very wisely put it, computer programming is an art. And an integral aspect of writing clean code and staying true to this art is modularity.

This post will cover the use of modules in Node.js — what they are, why they are essential, and how to export and import them in your project.

Modularity is one of the most popular programming practices that you’ll never fail to find in almost all of the top software projects across all programming languages and software stacks.

Modularizing your code means decomposing a monolithic piece of logic or functionality into separate, individual, independent components that work together in unison but are much easier to organize, update, maintain, troubleshoot, and debug. This fragmentation has several benefits:

As far as software development is concerned, the concept of modularity ties nicely with the renowned Single Responsibility Principle (SRP) and “don’t repeat yourself” (DRY) philosophies. They advocate that each sub-program component should focus on only one aspect of the functionality and avoid redundancy. You can read more about the top five S.O.L.I.D. programming principles in this post on our blog.

Thanks to this modularity, most programming languages can benefit from the virtues of native and third-party open source libraries and frameworks developed by their communities. Through modules, developers and organizations can segregate software features and functionalities into packages, share them, and easily import, utilize, and extend these in a simple plug-and-play fashion.

Modules have been vital in advancing software development and developing reliable applications.

The Role Modules Play in Javascript

Now let’s talk about the role of modules in the context of Javascript and Node.js.

Javascript started as a small programming language for the web; applications weren’t as full-fledged behemoths as they are these days. As a result, modularity might not have been above “get the language up and ready for building the web” on the priority list. However, as the language gained popularity (to the point of becoming the most commonly used programming language in the world) and eventually made way for Node.js, this requirement emerged as applications grew more complex and Javascript could run outside the browser. Workarounds using anonymous functions and global objects were not going to be enough. As a result, there have been several attempts at introducing structures for enabling modularity in Javascript code over the years.

In the world of Javascript, these additions come through different specification formats. Here are some of the recent formats that have enabled developers to leverage modules in their code in different ways —

CommonJS is the standard module specification for Node.js. To stick to the topic of this post, we’ll leave the other formats for now and solely focus on the module.exports (and require) syntax introduced by CJS.

What are Module Exports in Node.js?

Understanding the export and import of objects in Node.js is vital to understand the module object interface that allows this.

Node.js acknowledges each code file as a separate module. As you’ll see below, each runnable file gets its own module object that represents the module itself. This object (also known as a free variable) is local to each module. It contains information like the filename, path information, exported variables (the one we’re currently most interested in), and more. You can read more about the module object here.

Fire up the node command line in your terminal, and let’s print the module object to see what it’s all about.

You can also log this from a file and observe the ‘filename’ also get a value this time.

As we saw above, the exports property of the module object here is an object in itself. It contains all the variables, objects, and functions we want to export from our current module. Therefore, we can add other objects (in the current module) to it that we want to be accessible from other files. Let’s see what this looks like in code when we want to export a few simple variables. Here, we just add our variables to the exports object and verify the same.

As you can see, we can use the module.exports object as a dictionary that stores key-value pairs of things you want to export. We can also similarly export functions:

Aligned with the principles of modularity, this allows you to break down your application’s source code into smaller, more easily manageable functions and objects that we can share and integrate with the rest of the project.

Here are the two different ways of exporting your objects:

Named (multiple) exports: These are the ones we have been looking at so far. Everything we want to export here gets an identifier (i.e., the object’s key inside module.exports) that we can use when importing them.

Here, my_init, my_str, and foo are the identifiers we can use while importing these variables. This allows us to export multiple objects from our module.

Default (single, nameless) export: The other kind of imports are more basic. As we know, module.exports is just another object; instead of adding items to it (like before), we can also initialize the whole thing as we like.

Similarly, we can also export functions as such –

We go for this case when the module contains only one primary function or object we want to export. We can then import these objects in other files based on how we export these objects (either with or without named identifiers). Now, let’s look at importing from these modules using the require keyword.

For importing built-in modules, third-party ones (you’ve installed through NPM), and other custom ones in your project that you’ve exported using module.exports, the CommonJS specification offers the required keyword syntax.

Here, the name can be of a file or directory in the same folder, a built-in core module, or a node module package. Let’s exchange objects between multiple files in a small example. Assuming you have exported your variables as such in one file –

As I mentioned before,  require imports one of the following –

It throws an error if none of these match.

There’s also a fancy destructuring assignment operator that we can use to multiple objects in one line. This is what that looks like –

Here, as expected, we need to import the variables using the same object names used while exporting them.

Before we dive into a sample use case, let’s explore some other variants you’ll find across the internet.

You might also have seen developers using just exports, instead of module.exports.

By definition, exports is a shortcut/reference/alias variable assigned to the value of module.exports in the beginning (before evaluation).

There’s some unnecessary confusion that this causes, especially for inexperienced developers. Many think of exports and module.exports as interchangeable. And this even makes sense – if you try to play with the former a little bit, this interchangeable theory holds, and it does seem to be a convenient shortcut to the latter. Let’s see how. We’ll print the two at the beginning of a piece of code, then update both, one by one, and verify if their counterparts are updated or not.

However, this changes when we assign module.exports a new value (instead of merely updating the existing one) as such –

When this happens, the exports variable isn’t updated with the newly assigned value because it is still a reference (pointing) to the previous/initial module.exports value. Let’s extend the previous example to see this in action –

Here, we update sections 1, 2, and 3 like before, but assign a new value to module.exports in section 4 to see how that changes things and update it again in section 5. Here’s what the output for this looks like –

Even though exports seems to be a more convenient shortcut and would work just fine if you only update your exports (instead of giving the object a new value), you must be aware of one caveat: the value of module.exports is eventually exported and made available to import from other modules.

Which should I use?

TL;DR: Although using exports is a convenient shortcut, it might be safer to opt for module.exports because of the discrepancies caused when assigned a new value. In that case, it might require extra work to keep the two variables in sync.

To learn more about module.exports and its shortcut, I recommend reading the official Node.js documentation here.

Import/Export Syntax with ES6 in Javascript

In the world of Javascript, the language specifications and standard formats keep advancing and allow the introduction of new improvements in its utility and performance.

With the ES6 (ECMASCRIPT 2015) standard, Javascript also supports the import/export keywords for importing and exporting modules between files. It is fair to say that this syntax seems more intuitive than the module.exports/require one we have been discussing so far.

However, Node.js’s original module format has been CommonJS, and therefore, it treats JavaScript code as CommonJS modules by default. For Node.js versions between 8 - 12, you can enable the experimental ES6 modules’ support feature by renaming your file’s extension to .mjs and running your file as –

Although, support for ES modules comes enabled by default only in Node.js versions 13 onwards. You can read more about using ES6 modules in Node.js (version >= 13) here.

How to Do a Node.js Module Export: An Example

Now that we have some context about modules in Node.js, let’s walk through a simple example of how module exports work end-to-end. To demonstrate this, we’ll create a dummy application to simulate the manufacturing, export, and import of arbitrary items (through modules) across multiple cities (files). Unlike the examples above where we just exported simple strings and functions, we’ll move around classes and objects to give a sense of how we use modules in practice.

{Step 1} Create your Modules and Export Them

Based on the above architecture diagram, we’ll organize our modules in the following folder structure –

Let’s start by defining the item as a class with a constructor and a helper function. After defining the class with appropriate class variables, we will export this for instantiating later.

Next, let’s simulate a bunch of arbitrary manufacturing processes through functions in the manufacturing.js file. Logically, these functions will take in the item class objects we defined before, change some of their properties, and return them.

Now we have our item and manufacturing modules prepared and exported. We’ll import these into a module we’re going to call the hub in cityA/hub.js.

Note how we used the destructuring assignment operator above to import multiple manufacturing process functions. We also import (require) the file using ‘./’ before the filename to specify the file inside the same folder (instead of the project’s root directory).

We then instantiated item objects, passed them through arbitrary manufacturing processes, and eventually exported them (from city A).

Now that our manufactured goods are on their way from city A’s hub, let’s import them in city B’s.

Now that our code is ready, let’s test the manufacturing, export, and import pipeline to see if everything works as expected.

This confirms that our goods have successfully reached city B’s hub!

Where Best to Use Module Exports?

There are two ways in which you can position your export statements – (1) exporting after (or as) you define each object or (2) exporting them all at once at the end, as shown below –

Also, keep in mind that it might be safer to use only module.exports in most places instead of occasionally switching it with its alias if you are unsure of any new assignments to module.exports.

Now that you have a good understanding of modules and their export/import practices in Node.js, go ahead and evaluate how you modularise your code and consider leveraging well-organized modules for your next Node.js project.

If you are interested in reading more articles around software and web development, subscribe to our newsletter, and check out our blog. Also, consider monitoring your application’s performance using Scout so you can spend less time debugging and more time building!