Getting Started with Prometheus and Grafana 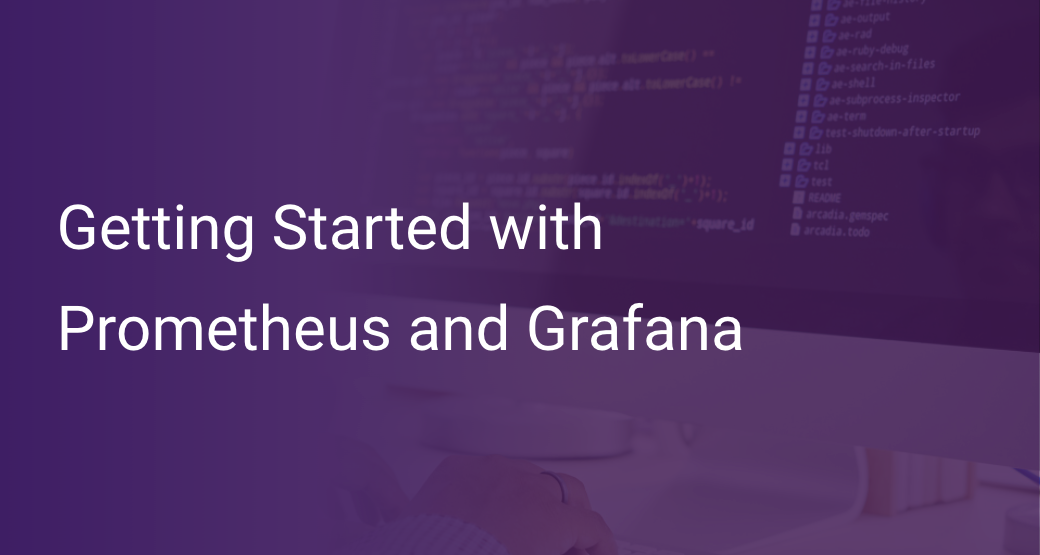 Getting Started with Prometheus and Grafana

The world is moving towards a data-driven society, resulting in businesses gathering more data to leverage for profit. This data is either in structured forms like JSON/CSV/XML or unstructured forms like text written on a notepad or typed texts. Regardless of the data’s formatting, the important thing is the information it contains. Various tools in the market extract data from different agents and platforms that will improve your metric monitoring system.

Prometheus is a tool used to monitor applications and show all essential metrics on one screen. Prometheus does not use protocols like SMNP or any kind of agent service. Instead, it scrapes metrics from a client (target) through HTTP and stores them in a local time-series database that you can query with its own DSL. It also uses exporters to convert metrics into Prometheus format. After collecting and processing data, Prometheus displays it in a beautiful UI using Grafana, a third-party tool used to show Prometheus metrics.

This article will discuss Prometheus, Grafana, and how Prometheus uses Grafana as a third-party library - use these links to navigate through the blog:

An Overview of Grafana

Prometheus is an open-source tool used for monitoring and maintaining applications. SoundCloud is a standalone, open-source project. In 2016, Prometheus joined the Cloud Native Computing Foundation as a second-hosted project after Kubernetes. Initially, it used StatsD and Graphite which were not that advanced. After that, they added more features like a multi-dimensional database, operational simplicity, scalable data collection, etc. after taking inspiration from Borgmon (used by Google at the time). They integrated all these features within Prometheus itself and it became the second incubated project under Cloud Native Computing Foundation.

Some of the core features that make Prometheus so valuable are:

How does Prometheus work?

Prometheus consists of many different architectural components like alert managers, exporters, push gateway, Prometheus servers, etc. Prometheus first scrapes data from instrumented jobs using HTTP endpoints directly or with the help of a push gateway. Sometimes Prometheus uses exporters to convert metrics into Prometheus readable format and then pull it. After scraping, it processes the data and runs some basic scripts for creating a new time series, using an old one, or generating alerts. For data visualization, you can use Grafana and other third-party libraries.

Prometheus is suitable for both machine-centric monitoring as well as dynamic service-oriented architectures. For purely numeric time-series data, it works at a different level. It also supports querying and collecting multi-dimensional data where every company focuses on microservices. You can rely on Prometheus when you want to quickly find and diagnose problems – your whole infrastructure will work even if it’s broken at some point.

Like any other tool, Prometheus is comprised of both internal and external components to make Prometheus a strong monitoring tool. Each component has its specific work and own requirements too.

In total, Prometheus has 7 components.

The server is the brain of any web or mobile application. It collects multi-dimensional time-series data, then analyzes and aggregates said data. The process of collecting metrics is called Scraping. The Prometheus server determines the targets and automatically scrapes. The language used for querying these languages is called PromQl. After applying filters and adjustments, the data is saved in key-value pairs.

Prometheus Gateway is very useful when you want to capture a service-level batch job.

Alertmanager is responsible for managing alerts sent by the clients. It checks for supplication and groups the alerts and routes them to the correct application like email, Pageruty, Opsgenie, etc. The alert manager is also responsible for switching on and off notifications. Using some configuration settings you can also group messages of one type and tell the alert manager to send them at once. You can also mute notifications for some events. There are some terms related to alert manager that you should be knowing when you are dealing with Prometheus:

Prometheus target represents how Prometheus extracts metrics from a different resource. In many cases, the metrics are exposed by the services themselves but in this case, Prometheus collects metrics directly. In some instances in which services are not exposed, exporters are required by Prometheus. Exporters are programs that extract data from a service and transform it into Prometheus-compatible forms.:

Client libraries are not restricted to text output metrics from Prometheus. It is an open ecosystem that can be used by the same APIs used for creating text format for the creation of metrics in another format or for feeding into other instruments.

As mentioned above in many cases metrics are self-exposed by the service. In that case, Prometheus automatically collects metrics. But in some cases, Prometheus needs to scrape metrics.

Exporters for Prometheus are mostly hosted on Github, but you can also create your own for instrumenting your code. While creating your library, keep in mind common instrumentation guidelines provided by Prometheus.

So far, we have discussed how we can use static-config files to configure the dependencies manually. This process is ok when you have simple uses with the config file, but what if you have to do this in a large amount, especially when some instances are added or removed every single minute.

For non-supported source resources, you have to use a file-based service discovery mechanism. This can be done using your configuration management system like Ansible or Chef and passing the script containing a list of sources from which you want to pull data.

These integrations help in reading and writing remotely. You can write and read services transparently and are mostly meant for storage purposes. Some of the integration are:

These integrations are beneficial in sending alerts as one of the primary tasks. Some integration in this category are:

These third-party integrations help integrate management functionality on top of your existing services:

An Overview of Grafana

Prometheus is used for collecting and aggregating app metrics from different platforms. However, Prometheus is not very good at representing those metrics in a dashboard. Hence the more data you have, the more confusing it is. Grafana was developed to solve these issues. It is an open-source web application tool for metrics visualization. Grafana also helps create alerts for any unexpected app behavior and takes the right steps towards it.  Over 1000 developers have contributed over 23,000 contributions to Grafana. On GitHub, the project has over 32,000 ratings and 6,000 forks. Grafana's developers are quite active, with over 2,000 problems and 100 active Pull Requests.

Prometheus is used for making dashboards more intuitive and user-friendly. It helps you convert unordered metrics in a super simple UI and makes it easy to read.

Grafana.com keeps a repository of shared dashboards that may be downloaded and utilized with Grafana standalone instances. To view dashboards for the "Prometheus" data source exclusively, use the Grafana.com "Filter" option.

Grafana is an open-source solution and also allows us to write plug-ins for integration with various data sources from scratch.

The tool supports the study, analysis, and monitoring of data over a period of time called time-series analytics.

It helps track user behavior, application behavior, error frequency in production or in the pre-provided environment, the type of errors in which related data appears, and contextual scenarios. In addition to the core open-source solution, the Grafana Cloud & Enterprise team offers two other services for businesses.

Grafana's most well-known competitor is Kibana, which is part of the Elasticsearch ecosystem. Kibana and Grafana both aim to make it simple to visualize and alert on the data they have access to, which is also Kibana's main flaw. Grafana does not have a restriction on the number of data sources it may use, whereas Kibana does.

Kibana has superior search capabilities than Grafana, which makes logical given that it is the tool that Elastic employs in its commercial product. Only commercial offerings have the time and resources to provide comprehensive search and event correlation.

Before installing Grafana, you have to look for various system requirements as it only supports these operating systems:

Grafana has some hardware requirements, although it does not use as much memory or CPU. Basic requirements of Grafana are minimum memory of 255MB and 1 CPU. But some features like server-side rendering, alerting, and data source proxy require more CPUs. Databases that are supported by Grafana are MySQL, PostgreSQL, and SQLite. Browsers that are supported by Grafana are Chrome, Firefox, Safari, Microsoft Edge, and IE 11 for Grafana versions prior to 6.

With every version of Grafana, there is a zip file associated. Before unzipping the file open the file properties and click ‘ok’. This zip file is mainly for standalone windows libraries that Grafana will use.  Then after successful installations run grafana-server.exe from the command line and you can see Grafana in your local port 3000. For using Grafana as a windows service you can use NSSM

Before starting a Prometheus installation make sure you have proper internet and administrative permission on your computer.

Step 1: update the YAM and download the latest binaries of Prometheus available whether it is for Windows, Linux, or the official website.

Step 2: Download the tar file using curl or directly and rename the file as prometheus-files.

Step 3: After this, you have to create a Prometheus  user, required directories like /etc /var, and Prometheus as the owner of these directories

Step 4: For setting up a Prometheus configuration all your configurations should be present in the /etc/prometheus/prometheus.yml file. Create this file using the following command

This command will open the above file in vi editors for you.

Then add this contents to the file. You can tweak scrape_interval according to your need and the target also.

Change the ownership to Prometheus user.

Step 5: Create a Prometheus service file at the following location

For checking the Prometheus service statue run the following command

Now let us see how to create a new dashboard and various metrics related to them.

Click on the plus icon on the left side and select the new dashboard here. After that, a screen comes with two big blank spaces where you can add rows and widgets for showing your metrics. All the queries that you want to run here will be using Prometheus query language (PromQL).

Get Grafana metrics into Prometheus

Now you can configure the data sources using the Grafana config file. In the previous versions you could only use API for provisioning and configuring the data and that required some HTTP credentials setup and services should be running before the creation of dashboards. But from v5.0 of Grafana, you can provision it using config files. It has made version control easy and natural for data sources. Below is one of the examples for provisioning the data source:

Prometheus is a great tool for scraping metrics from your website and other sources. It helps in analyzing multi-dimensional databases using its own query language, PromQl. Grafana is used to enhance dashboard representation and Prometheus UI. Grafana helps in representing metrics in a very systematic way and also helps in analyzing them. You can integrate Grafana and Prometheus very easily using the steps mentioned above.

Grafana is a useful tool for not only Prometheus but for other platforms as well.

ScoutAPM is also an application monitoring tool with many modern features. You can use it to smoothly monitor your application. You can get started with just a free sign-up on scoutapm.com. It is absolutely free for 14-days and no card details are required.