I've been hearing how Docker is the new awesome, but it didn't click for me until I dug in with a practical question: if we deployed Scout via Docker, would deployment be a more pleasurable experience?

My three takeaways are below.

Finally, an efficient way to simulate our production environment

Our production environment has 16 servers. If I attempted to simulate this locally with VirtualBox's recommended configuration of 512 MB per-instance, this would use about twice the RAM I have on my laptop. VirtualBox has a lot of overhead as each image uses its own kernel and file system. This isn't the case with Docker - containers share the same operating system as the host, and when possible, the same binaries and libraries. It's possible to run hundreds of containers on a single Docker host.

I can't simulate our full environment locally, but lets just look at the time to start a single VM using Vagrant:

That's over a minute and a half to start a single image. What if I need to make a simple config change and want to verify it works when I restart the image? That's another minute a half.

That is a cruel punishment when you make a mistake.

Just how lightweight is Docker? When you run processes in a Docker container, you might not even notice they aren't running directly on your host. In the example below, I'm starting a Docker container from an image I've tagged "rails" that runs a Rails App (Dockerfile):

That's just two seconds to start the container and launch supervisor (which starts the Rails app).

In short, Docker goes beyond making it possible for you to simulate your full environment on you development computer. It makes it fast. When it's this easy, hand me the keys: I'll test out the full stack.

If you are scripting the process to build a virtual machine image from a base image (example: building the Rails stack on Ubuntu), getting all of the pieces to flow correctly can be a pain if you don't do it frequently. Lets say you install the dependencies for Ruby:

Then, you try to install the dependencies for NodeJS, but you forget to add the node apt repository:

After you fix the NodeJS issue, you still want to be confident your script works on a fresh base image. You'd need to re-run the Ruby install, waiting 82 seconds before the Node install even starts. Painful.

Put the steps to build an image in a Dockerfile. Dockerfiles are easy to read because you don't need to learn a separate DSL - it's basically just running commands as you enter them. Installing Ruby the first time won't be any faster, but lets take a look what happens when we build the image again from the Dockerfile:

Wow - how did installing Ruby take under one second this time around? See those cache keys (ex: dc92be6158b0)? Rather than re-running the line from the Dockerfile, Docker sees that it has already run that command and just retrieves the file system changes from its cache. It can do this magic because Docker uses the AuFS file system, which is a union file system (kind of like applying diffs).

In short, Docker makes it painless to iteratively build an image as you don't need to wait for previously successful steps to complete again. I'm not perfect and Docker doesn't punish me when I make mistakes.

Like many other deployments today, Scout uses long-running virtual machines. We handle infrastructure updates via Puppet, but this is frequently more painful than we'd like:

None of these issues are Puppet's fault - a tool like Puppet or Chef is needed when you have long-running VMs that could become inconsistent over time.

Deploy images - don't modify existing VMs. You'll be 100% sure what runs locally will run on production.

But images are large, right? Not with Docker - remember containers don't run their own guest OS and we're using a union file system. When we make changes to an image, we just need the new layers.

For example, lets say we're installing Memcached onto our app servers. We'll build a new image. I'll tag it as dlite/appserver-memcached, where dlite is my index.docker.io user name. It's based off the dite/appserver image.

It took just 13 seconds to install Memcached because prior Dockerfile lines were cached. I love speed.

I'll commit and push this:

On the production server, I'll pull this image down:

It took just 15 seconds to grab the dlite/appserver-memached image. Note the image size is just 10 MB as it uses the appserver image as the base:

We didn't need to pull down the entire image with Memcached, just the changes to add Memcached to the dlite/appserver image.

Most of the time, the changes we make are much smaller, so pulling down new images will be even faster.

This has big implications: 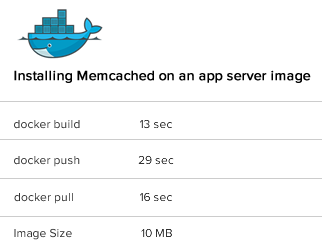 Mind blown! It means we don't need to worry about consistency - we aren't modifying existing VMs, just launching new containers. It means rollbacks are a breeze! Memcached falling down? Stop the containers running dlite/appserver-memcached and start containers with the dlite/appserver image again.

It's not all rainbows

The upcoming release of Flynn.io, which will use etcd for this, will help. However, these are problems smaller scale deployments didn't have to worry about before.

Putting it all together: Docker is to deployment as Git is to development

Developers are able to leverage Git's performance and flexibility when building applications. Git encourages experiments and doesn't punish you when things go wrong: start your experiments in a branch, if things fall down, just git rebase or git reset. It's easy to start a branch and fast to push it.

Docker encourages experimentation for operations. Containers start quickly. Building images is a snap. Using another images as a base image is easy. Deploying whole images is fast, and last but not least, it's not painful to rollback.

Fast + flexible = deployments are about to become a lot more enjoyable.

Scout APM helps you find and fix your inefficient and costly code. We automatically identify N+1 SQL calls, memory bloat, and other code-related issues so you can spend less time debugging and more time programming. We have Ruby, Python and Elixir agents.