How to Combat Python Memory Leaks 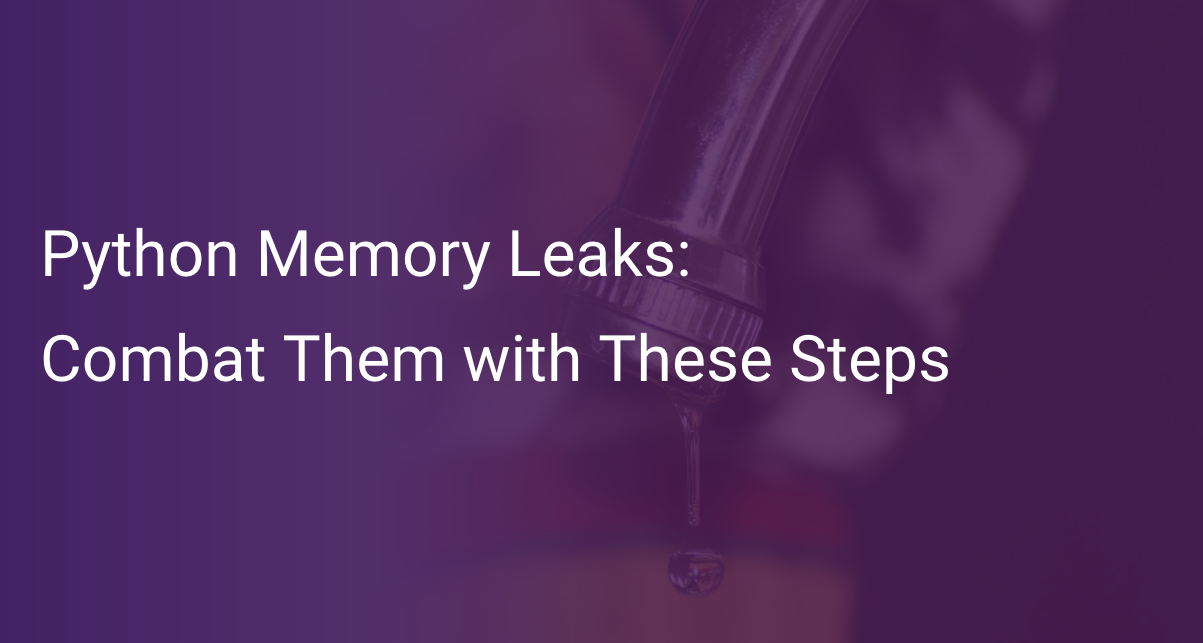 How to Combat Python Memory Leaks

Memory leaks are one of developers’ worst nightmares. They can easily take down a healthy running application within hours if not minutes. It can be difficult to detect some of such leaks since they slowly grow and take over your app’s available memory. On top of it, each programming language manages memory in its own unique ways and hence can leak memory in different ways. Hence proactive measures to identify and prevent such leaks from happening is crucial.

Python is one of the most powerful yet simplified languages in the current market. While it employs a range of measures to ensure that its apps do not run in resource deficit, it is still not completely aloof from memory leak incidents. In this guide, we will discuss how and why a memory leak occurs in a Python application and how you can combat it. Additionally, you should take a look at the Scout blog which can help you find solutions to python memory leaks and other similar issues easily.

Feel free to navigate the guide using these links:

What Can Lead to a Python Memory Leak?

A Python memory leak refers to a situation in which a python app’s memory consumption keeps increasing over time and ultimately no more memory is available resulting in the app crashing due to a lack of resources. It is not to be confused with memory bloat, which is a sudden spike in the memory consumption graph that generally occurs due to unplanned memory allocations happening in bulk.

There can be multiple causes of Python memory leaks. Let’s take a look at some of them in this section.

Most programming languages implement measures in their garbage collection mechanisms to mark and clean unreferenced objects automatically. However, it is not perfect, and quite a few objects are sometimes skipped out of this process. Therefore the best way to handle this issue is to manually delete every object that you allocate memory for. This way, you can be sure that your program is clearing as much memory as possible and not contributing to an unchecked memory consumption growth.

However, you are likely to use multiple third-party libraries in your code. You do not have control over the coding standards used in such libraries, and hence they can turn out to be the source of memory leaks as well.

In some cases, the garbage collection mechanism can be faulty and let unreferenced objects or to-be-deleted objects stay in the memory longer than they need to. Even if your garbage collection mechanism delays execution by some time but still clears the memory, it could be contributing to memory leaks anyway. Therefore it is best to keep an eye on your app’s memory consumption even if you are sure to have used the best memory management conventions throughout your code.

How to Prevent a Memory Leaks in Python

Now that you understand how memory leaks can occur in Python, let’s take a look at some of the ways in which you can identify and prevent memory leaks in Python.

While there are numerous ways to identify python memory leaks manually, it can be difficult to pick them up in live applications. You can not go about manually profiling each app to check if there’s a memory leak from time to time. This is why you need performance monitoring.

Performance monitoring keeps an eye on your application’s resource usage and alerts you when it goes over specified thresholds. That’s when you know something’s off in your app. Some performance monitoring tools are intelligent enough to learn the pattern in which your app consumes resources and notify whenever an anomaly is detected. Such tools can even predict how your apps will behave in the near future.

Debugging an app enables you to view how it is consuming memory across its lifecycle. Once you have data on this, you can filter and search through to find objects that aren’t needed but are still consuming memory. You can then refactor your code to delete them and free the memory right away.

However, you should be careful when using certain debuggers in Python. If not used properly, debuggers such as pdb can maintain references to your app’s objects and prevent them from being garbage collected normally.

Tracemalloc (short for trace memory allocations) is one of Python’s top inbuilt features. It can help you trace an object to the source where it was allocated in the memory. It also offers statistics on the overall memory management of the application.

One of tracemalloc’s most important use-cases is to track the memory usage of individual objects in the runtime. You can find out which object is consuming memory and identify the cause of memory leaks easily.

You can then use tracemalloc’s tracing abilities to identify the location of those objects in your code and refactor it appropriately to reduce unnecessary memory consumption. Tracemalloc also helps you to compute the difference in the memory consumption between two snapshots in the runtime of an application. This difference can directly help you to identify if there’s a memory leak in the app.

CPython is the underlying interpreter used to run Python programs. CPython has inbuilt functions that ensure to collect unreferenced objects (via reference counting) by itself and remove them from the memory. Therefore, you can rest assured that the CPython libraries will do the work behind the scenes to eliminate unneeded memory allocations.

However, the garbage collection process in Python works on thresholds and is usually triggered when a considerable number of objects are dereferenced via your program. This leaves room for objects to pile up and cause memory leaks in certain situations. This is why you need the methods discussed above.

Memory leaks are one of the slowest yet worst ways to lose a healthily-running application. Such issues can be hard to detect since they occur over time and slowly eat away the available resources from your application’s reach. But there are ways to actively monitor for and prevent such issues from happening. In this guide, we showed you why memory leaks can occur in Python apps and how you can prevent them.

Scout APM is one of the best monitoring tools to look out for Python memory issues and act on them before they cause damage to your app’s normal functioning. Feel free to check Scout’s APM offerings and take a 14-day free trial to test it out in your live application and see its impact for yourself. Also, make sure to check out Scout’s blog for more of such content on Python memory management and other issues. You should consider subscribing to Scout’s monthly newsletter for routine delivery of such guides to your mailbox!

Here are answers to some of the most frequently asked questions about Python memory leaks.

What is a Python memory leak?

A Python memory leak is a situation where the available memory space is reduced due to improper memory management and failure to release memory on time. It can prove to be fatal for applications of any scale and type.

How does Python handle memory issues?

Python manages memory using a dynamic memory allocation/de-allocation strategy where the memory heap holds the objects used in the program. The Python memory manager looks after the allocation and de-allocation of the heap space via its API functions.

How does Python handle memory leaks?

In most cases, the underlying CPython language ensures that the garbage collection process cleans up unused and unreferenced data from the memory. However, it might fail sometime when you need to step in and design your code to handle memory leaks by itself.

How do I find a memory leak on an application?

The best way to find a memory leak in an application is to monitor its memory usage for set intervals of time. If you notice a memory consumption curve that keeps rising up throughout the uptime of your application, it might be an indication of a bad memory management structure.

What is a memory leak in an application?

A memory leak is a situation in which an application does not free up as much memory as it occupies, and the available usable memory keeps reducing. If not checked in time, a memory leak can cause an app to eat through all available memory and crash when no more memory is left to consume.

How does Python detect memory leaks?

You can detect memory leaks in Python by monitoring your Python app’s performance via an Application Performance Monitoring tool such as Scout APM. Once you detect a memory leak, there are multiple ways to solve it.

How do you prevent a memory leak in Python?

Preventing memory leaks in Python is not as difficult as it seems. You can set up 24x7 monitoring to get notified about anomalies in your app’s memory consumption and then debug your application to find out where it is bleeding memory. You can also leverage Python’s inbuilt tools such as tracemalloc to help identify the cause of a memory leak easily.

Monolithic Applications: A Relic of the Past?

4 Best Practices for Root Cause Analysis