Rails::API vs. Sinatra vs. Grape: which Ruby microframework is right for you?

Updated version of an article first published on February 20th, 2017.

Rails dominates Ruby web frameworks: the next most popular framework, Sinatra, has 5% of the popularity of Rails. However, that doesn't mean non-Rails frameworks like Sinatra and Grape don't have their place.

When does it make sense to step away from ActionController and use another framework? What are the sweet spots and gray areas for these frameworks?

I'll explore these questions below.

To understand why Sinatra, Grape, and Rails::API exist, it's important to look at the timeline of the Ruby web ecosystem over the last several years.

Sinatra, released in the fall of 2007, was the first of the non-Rails web frameworks to gain traction. Its focus on quickly creating web apps with minimal effort carved out a niche versus the Rails monolithic approach. A small Sinatra app can easily be contained in a single file, which is a sharp contrast to a Rails app.

Rails::API was released in the spring of 2012. Rails::API loads a subset of the Rails stack for apps that only generate JSON content, skipping out on middlewares that don't apply to API apps (examples: cookie, flash, and session management). Rails::API started as a stand-alone gem, but with the release of Rails 5 in the summer of 2016, its now included by default in Rails.

There are other alternative web frameworks in Ruby but their usage is significantly lower than Sinatra. For simplicity, we won't discuss those in this article.

Sinatra, Grape, and Rails::API have sweet spots and overlapping usage scenarios. Let's go over some questions that can identify which framework might be the best fit for your scenario.

Are you complementing an existing Rails app or starting fresh?

If you are building a simple web app, you may think you don't need the special sauce that Rails provides. However, just like peeling away the the layers of an onion, you start to realize that even simple apps require decisions that Rails has already made for you.

For example, if you choose Sinatra or Grape for an initial version of an app, you'll need to think about:

In short, when you don't go Rails, you'll need to make some decisions and have some opinions. If you are building an app as part of a team, this can add a layer of complexity and differing opinions on direction that don't exist with Rails' configuration-over-convention approach.

For these reasons, I typically suggest starting with a Rails app and breaking out services when there's a clear need and scope.

Could your app grow beyond serving JSON?

What if you make the wrong framework choice?

Thanks to Rack's support for mounting apps, you aren't stuck with a rewrite if the scope of your app changes and your chosen microframework begins to get outside its sweet spot. You can easily mount Grape and Sinatra apps within a Rails app, or even mount a Grape app alongside a Sinatra app.

Is this for a public-facing or highly used JSON API?

Grape emerges as a clear choice when you outgrow a roll-your-own approach to an API. The conventions it covers make it easier for a team of developers to have a clear understanding of best practices that don't exist in custom API apps.

These benchmarks from November 2016 generated by Eugene Melnikov include comparisons of Sinatra, Grape, and Rails::API. Benchmarks can vary widely from real-world use cases, but Sinatra and Grape clearly outperform Rails::API: 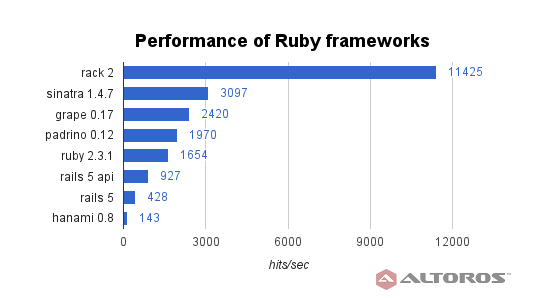 I'd view these with some caution: Rails::API still contains a significant amount of middlewares that may be required in a production Sinatra or Grape app. These middlewares add overhead.

Which framework should I use?

There are areas where the decision between frameworks isn't clear cut. Some of these areas:

There are some sweet spots for each of these frameworks: